Xiaomi has finally scheduled the Xiaomi 12 launch event. After many months of speculation, the company’s next big thing for the flagship segment is coming on December 28. Unlike the last year, Xiaomi’s December event should bring more than one flagship. We expect Xiaomi 12, Xiaomi 12X, and Xiaomi 12 Pro smartphones. The Pro variant has been spotted on 3C and TENAA certification recently with 120W fast-charging. Now the very same variant has passed through the Geekbench database revealing some of its key specifications. The Pro variant certainly will be the fancier of the trio, so let’s see what it has in tow. 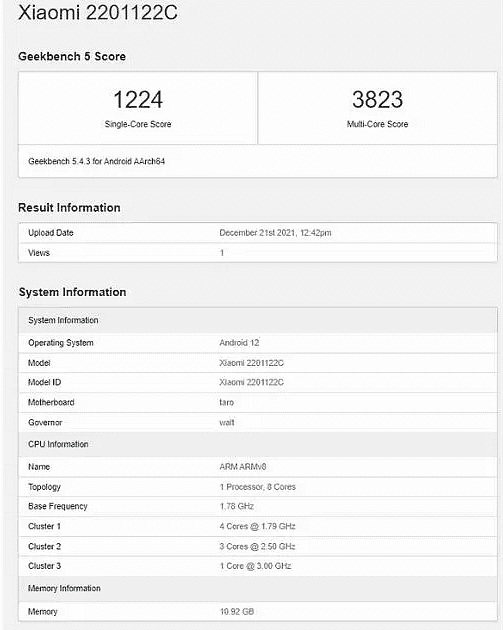 The Xiaomi 12 Pro passed through Geekbench certification with model number 2201122C. The listing confirms the device will pack the recently announced Qualcomm Snapdragon 8 Gen 1 processor. For those unaware, this chipset boasts one ARM Cortex-X2 core clocked at up to 3 GHz, three ARM Cortex-A710 cores clocked at up to 2.5 GHz, and four cores clocked at 1.79 GHz. Moreover, the listing reveals 12 GB of RAM and Adreno 730 GPU. We suspect there will be other RAM variants and multiple storage options.

The chipset with ARMv9 architecture scores 1,224 points in the single-core tests and 3823 points in the multi-core department. The upcoming smartphone will run Android 12 straight out of the box with MIUI 13 running on top.

As far as the specifications are concerned, the Xiaomi 12 Pro is expected to boast a 6.67-inch AMOLED screen with a 120 Hz refresh rate. According to rumors, this is the latest device to enter the trend of under-display cameras. Moving around to the back, the rumors say it will have a primary 50 MP camera. In terms of storage, the device will go up to 512 GB of Internal Storage. It will charge fast with a 120 W charging solution.

Besides the Pro variant, the company will also unveil the vanilla smartphone with Snapdragon 8 Gen 1. This one will have the same 6.67-inch AMOLED screen with a 120 Hz refresh rate and Full HD+ resolution. Last but not least, the Xiaomi 12X will arrive as a cost-effective flagship. It will have a smaller 6.28-inch screen with a 120 Hz refresh rate and a Full HD+ resolution. Interestingly, the vanilçla will have “just” 67W charging, and we expect it on the 12X as well.

The trio of smartphones will go official in the next week, and we expect the leaks to intensify in the next few days.

Next iPhone 13 Will Be Manufactured In India Starting February 2022