According to a poll conducted by The Washington Post, Amazon and Google are trusted more by users than Apple when it comes to the processing of their personal data and online activity. At the same time, the overwhelming majority of those surveyed do not trust Facebook, TikTok and Instagram.

More than 1000 respondents took part in the poll by The Washington Post. The publication decided to find out how much users trust Facebook, TikTok, Amazon, Instagram, WhatsApp, YouTube, Google, Microsoft and Apple when it comes to the security of user data and privacy of network activity. The survey participants were asked to characterize their attitude towards each of the companies with one of the following statements: “I strongly trust”, “I trust”, “I trust a little”, “I don’t trust at all” and “I have no opinion about this company”.

18% of those surveyed said they “strongly trust” Apple, while Google and Amazon each scored 14%. At the same time, 26% of respondents gave the rating “I trust” Apple, while 39% and 34% of respondents, respectively, described their attitude to Amazon and Google with this statement. The sum of positive ratings for Apple was 44%. It is behind Amazon and Google, which secured the trust of 53% and 48% of users, respectively.

At the same time, 40% of respondents do not trust Apple and Amazon or trust little. The distrust rating is topped by Facebook, with which 72% of respondents are afraid to share personal information. Then we have TikTok and Instagram, which have 63% and 60% negative ratings, respectively. Another poll last week showed a similar feeling. It showed that many consider Meta the worst company of 2021. 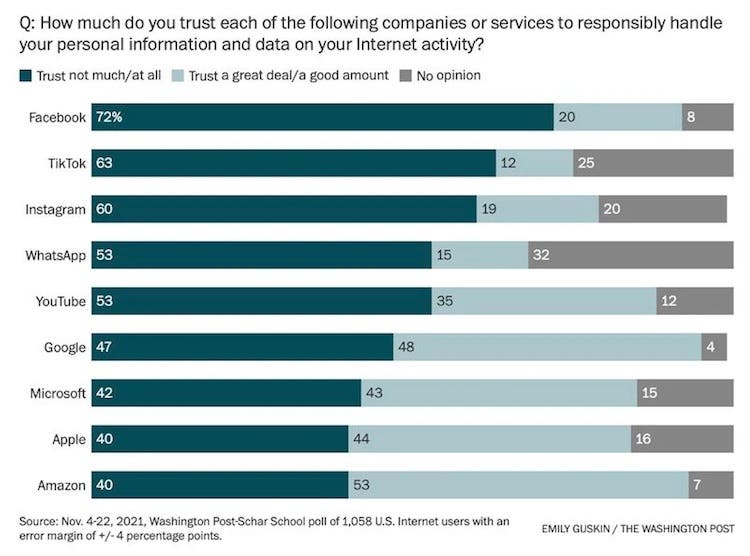 Yahoo! Finance named Meta the worst company of the year

Every December, Yahoo! Finance chooses “Company of the Year” based on a number of parameters; including market performance and other achievements – in 2021, this title belongs to Microsoft. Additionally, they chose the “worst company of the year”, which caused the greatest public disappointment.

According to a survey of 1.5 thousand respondents, Meta (formerly Facebook) is the worst company of the year. Among the reasons that made the voters call Meta the worst is the use of censorship. According to the portal Yahoo! Finance, this opinion belongs to supporters of conservative views, since they believe that the declared policy of “free speech” is in fact dishonest, and people should be able to express any opinions. At the same time, their opponents, on the contrary, blame the social network and the company behind it for the growth in the number of extreme right-wing extremist views. In addition, the platform has been a subject of condoning the spread of disinformation.

Next Apple to release more iPhones this quarter than expected