Many standard smartphones may suffer from a sense of fragility. However, rugged phones with a especially tougher design can withstand abuse and survive in rough environments. But when it comes to them, people always think of big and heavy devices resembling clunky bricks, And then hesitate to buy one due to design worries.

But nowadays buying a rugged phone no longer means you have to compromise on the design or sought-after features. Many of them have a utilitarian design and all the bells and whistles already,  such as fast processor, decent cameras and excellent audio quality. And if you need to buy a rugged smartphone and want it to be pocket-friendly, there is actually a new release worth considering. That’s Ulefone Armor X10, which is insanely durable, boasts a massive battery and the same features you’ll find on a mainstream smartphone. All that while coming in a compact size most people are crying for. And with a bargain price too ! So let’s take a look,

For a rugged phone, the newly released Ulefone Armor X10 has a surprisingly stylish and utilitarian design. There are lovely polished metal bands on both sides, sturdy matte panel on the back as well as reliable physical buttons for Power, Volume and Shortcuts. It looks exactly the same as the most popular Armor 12 in Ulefone’s rugged series, but with a smaller size. Measuring 158.2 x 76.7 x 14.6 mm and weighing 256 grams, this phone is easy to hold, and more comfortable to keep in a pocket. You can hold and operate it using only one hand easily.

On the front of the Armor X10 is a 5.45-inch IPS LCD display with a resolution of 720 x 1,440 pixels and a refresh rate of 60Hz. Just the right screen size for texting, watching videos or browsing. On the right side is the volume rocker and the power button, nothing special to that. However on the left side of the phone you’ll find a card slot that can hold two Nano-SIM cards and one Micro SD card simultaneously. And a custom key for setting three different shortcuts. Like for example for starting Zello, the most popular PTT platform, allowing the phone to work like a walkie-talkie. There’s also a Type-C charging port and a 3.5mm headphone jack.

In terms of durability, the Armor X10 is IP68/IP69K or MIL-STD-810G certified. So it is nearly unbreakable abd can survive dust, water, drops and almost anything else you can think of. It can resist dust entirely and withstand 1.5-meter drops onto concrete and will also survive 1.5 meters underwater for 30 minutes and 1 meter underwater for 24 hours. Simply amazing. Whether being used outdoors in bad weather, on the job in industrial or construction sites or even by rowdy clumsy school kids, this phone is a great rugged choice. 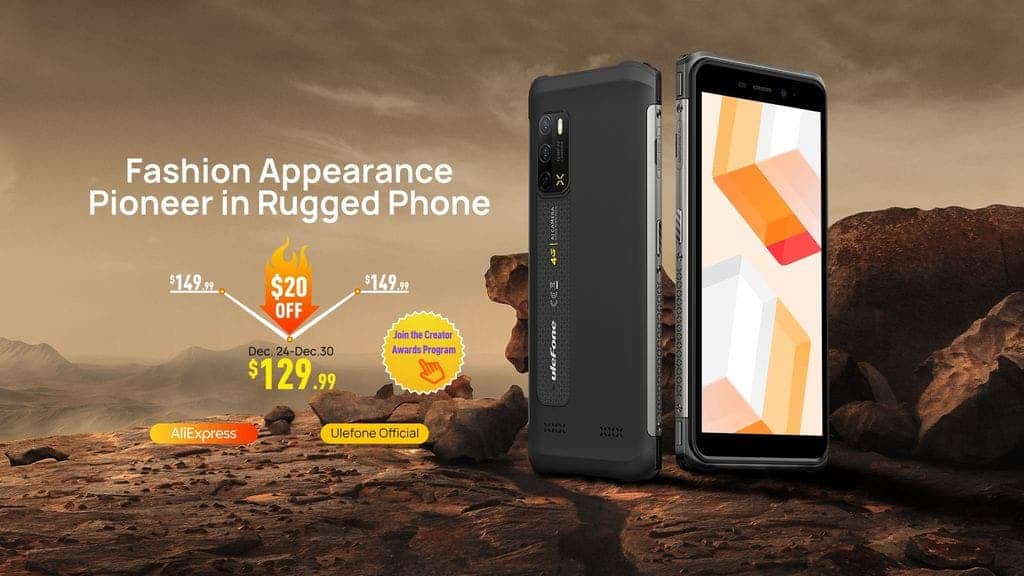 As for its other specs, the Armor X10 comes equipped with a MediaTek Helio A22 chipset based on a 12nm process. The four ARM Cortex-A53 cores operate up to 2.0GHz and with an IMG GE8300 GPU you can run multiple apps smoothly at the same time. The rugged phone packs a 13MP dual rear camera, 5MP front camera, 4GB of RAM, 32GB of built-in storage, and a 5180mAh battery that lasts more than 12 hours.

Furthermore, the Armor X10 has dual super-linear speakers with added Smart PA to bring an enhanced sound quality and volume. Or headset-free FM radio, dual-band WiFi, and the NFC capability for easy mobile payments. What more could you ask for from a rugged phone at this price ? Ulefone Armor X10 just delivers it all.

So how do you feel about this compact rugged smartphone? Already intrigued ? Then you can maybe join the Creator Awards Program officially launched by Ulefone. In this program you’ll get the opportunity to get large coupons and win prizes or even free phones. Additionally, Ulefone has Pre Sales Activities on AliExpress for the newly released Armor X10 and you can buy it at just $129.99. Saving you $20 off the standard price of $149.99 after using the coupon. Quite a deal eh ?