The Samsung Galaxy M33 smartphone has passed through the Geekbench website, revealing some vital information about the upcoming handset. The South Korean tech behemoth is on the verge of unveiling its new budget 5G smartphone, carrying the Galaxy M33 5G moniker. The upcoming smartphone has been subject to multiple leaks lately. To recall, the launch date and battery capacity of the Galaxy M32 successor surfaced online earlier this month via the Safety Korea certification website.

According to the certification website listing, the phone will be drawing its juices from a robust 6,000mAh battery. Now, the Samsung Galaxy M33 smartphone has made an appearance on the Geekbench database website, hinting at the phone’s imminent launch. Aside from that, the Geekbench listing divulges some key details about the upcoming handset. The Geekbench listing reveals the Galaxy M-series smartphone’s performance metrics, single RAM variant, and processor. Moreover, it gives us an idea about what the phone has in store for Samsung fans.

Aside from revealing key details about the upcoming Galaxy M33 5G phone, the Geekbench listing includes an image of the handset. Furthermore, the phone with the model number is SM-M336BU acquired 726 and 1,830 in the single-core and multi-core tests. The listing also suggests that the Samsung Galaxy M33 5G will pack an octa-core Exynos 1200 5G processor, under the hood. Moreover, it will ship with 6GB of RAM. In the software department, the Galaxy M33 5G will run Android 12 OS out of the box with Samsung’s proprietary OneUI skin out of the box on top. 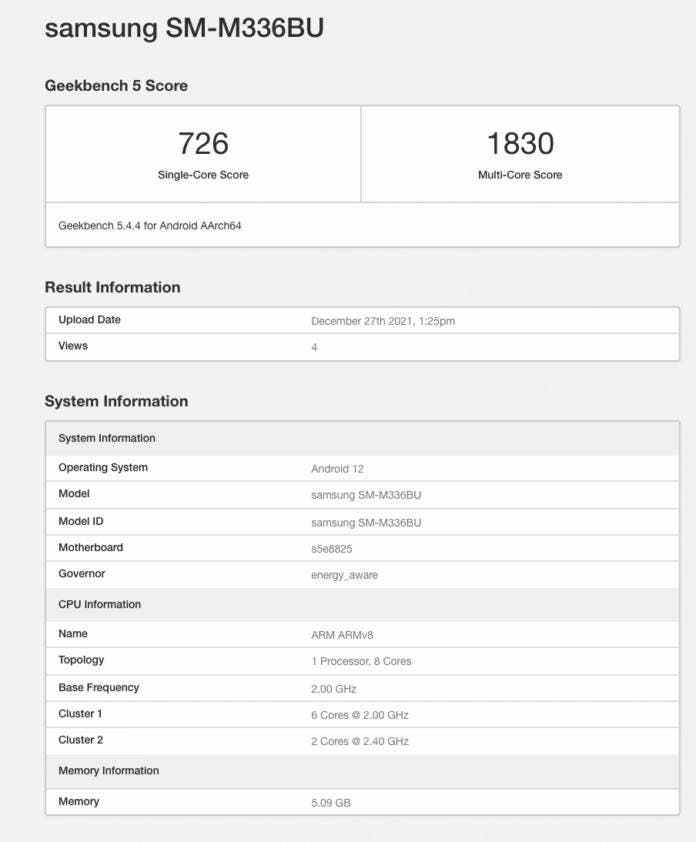 Considering that the phone could go official in 2022, there is a possibility that it might feature the OneUI 4.0 skin. Regrettably, the Geekbench listing does not provide information about the Galaxy M33 5G. However, since the phone has already appeared on the benchmarking website, Samsung would have already started its testing. In other words, the Samsung Galaxy M33 5G could launch in India soon. Apart from appearing on the SafetyKorea certification, the Galaxy M33 5G has not bagged certification from any other website. According to a report by Nashville Chatter, this is a sign that the phone isn’t likely to launch at least for a few weeks.

The word on the street is that the Samsung Galaxy M33 5G will sport a 6.5-inch display. This display will come with FHD+ resolution and a waterdrop notch for the selfie camera. Moreover, the phone will reportedly come without a 3.5mm headphone jack. Aside from that, it is likely to carry an IP67 rating for dust and water resistance. In the photography department, the Samsung Galaxy M33 5G will reportedly house four rear-mounted cameras. These include a 64MP camera, an 8MP camera, a 5MP, and a 2MP camera. Upfront, the phone will probably feature a 13MP shooter for selfies and video calling.