A new Google Pixel phone might be headed to India, and it is likely to be the much-awaited Pixel 6a smartphone. Much to the chagrin of the huge Pixel fanbase in India, Google decided against launching its Pixel lineup in the country. The search engine giant did not bring a new Pixel phone in India after releasing the Pixel 4a LTE. As expected, Pixel fans have been waiting with bated breath for a new Pixel phone since then.

Now, it looks like Google is gearing up to bring a new Pixel smartphone into the Indian market soon. According to a noted tipster, a new Pixel device is on its way to India. Aside from that, the leaker has even divulged the phone’s launch timeline in the country. To recall, the Pixel 6 and Pixel 6 Pro are the latest flagships from Google. The two newly launched handsets pack the company’s own Tensor chipset.

New Google Pixel Phone (Pixel 6a) To Launch In India

According to a tweet from tipster Yogesh Brar, Google is prepping to launch a new Pixel phone in India by the end of Q1 2022. Furthermore, Brar suggests that the mysterious handset could make its appearance on the BIS certification website in the coming days. For those who are unaware, passing through the BIS (Bureau of Indian Standards) website is a sign that a device is on the verge of launching in India. Despite the lack of an official confirmation, Brar believes that the mysterious Pixel phone could be the Pixel 6a.

A new Pixel device is headed to India, may launch at the end of Q1 22. It will pop up on BIS soon, might as well be the Pixel 6a some of you have been waiting for.

However, a report by MS Power User suggests that Google is highly unlikely to bring the Pixel 6 series into the Indian market. To recall, Google did not launch the Google Pixel 4a 5G and other models in the country citing poor sales performance of previously launched phones. Nevertheless, there is a possibility that a new Pixel phone could go official in India sometime in March this year. If Brar’s speculations prove to be true, the upcoming Pixel 6a will succeed the Pixel 4a. Moreover, the Pixel 6a could pack a Tensor GS101 chipset, according to an earlier report.

The Pixel 6a seems to be drawing inspiration from the Pixel 6 and 6 Pro in terms of design. The phone has a punch-hole cutout at the center of the display for the selfie camera. Aside from that, it could even house an in-display fingerprint sensor. Moreover, the phone features a flat display and slim bezels. The rear panel features a visor-like camera module. This rear-mounted camera setup will comprise two cameras and an LED flash. The phone seems to have a glass back with a dual-tone finish.

The right side houses the volume and power buttons. Furthermore, the phone reportedly measures 152.2 x 71.8 x 8.7mm. With the camera bump, it measures 10.4mm. The bottom includes a USB Type-C port along with two grilles. One of these grilles is for the speaker, while the other one is for the microphone. All four sides have antenna cutouts. Moreover, the left side has the SIM card slot. 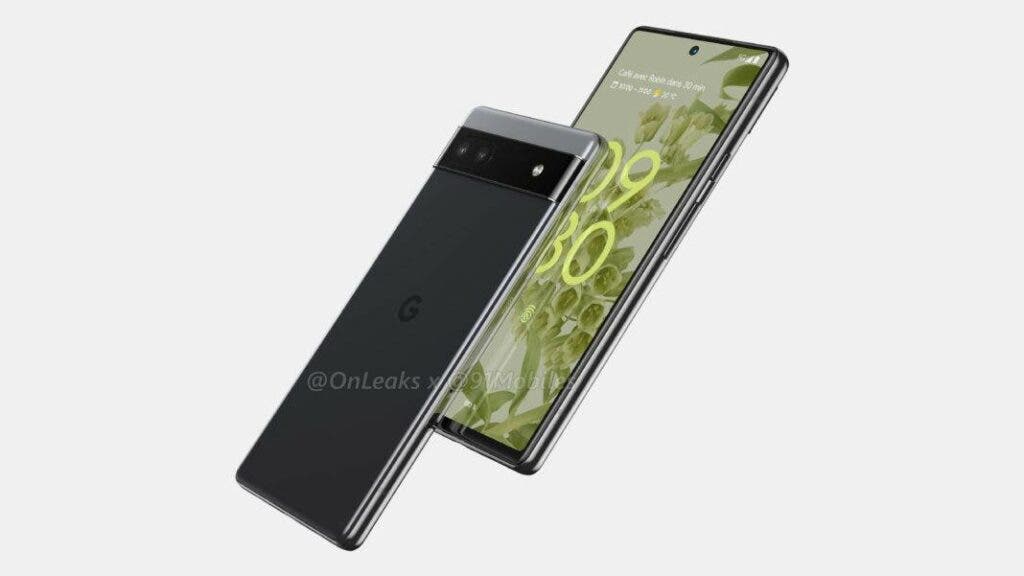 The Google Pixel 6a smartphone will probably feature a 6.2-inch flat OLED display. Moreover, it is likely to come with an in-display fingerprint sensor. If earlier reports are anything to go by, the Pixel 6a could pack a Tensor chipset. Furthermore, the phone will ship with 8GB of RAM and offer 128GB of onboard storage. Regrettably, this built-in storage might not be further expandable. The phone will run Android 12 out of the box.

For optics, the Pixel 6a will reportedly house a 12.2MP Sony IMX363 main camera, as well as a 12MP IMX386 camera, which could capture ultra-wide shots. Upfront, the phone will probably feature an 8MP IMX355 shooter for selfies and video calling.