The Moto Tab G70 tablet has been spotted in a Flipkart listing, hinting at the Android tablet’s imminent launch in India. Motorola will be unveiling its new Android tablet in the coming days. The American telecommunications giant is slated to bring the much-awaited Moto Tab G70 into the Indian market. The tablet’s India launch will probably be a part of its global debut. Despite the lack of official confirmation about the tablet’s exact launch date, MySmartPrice has divulged key details about the marketplace where the Android tablet will go on sale.

According to a report by MySmartPrice, the Moto Tab G70 will be available in India via Flipkart. Furthermore, the publication has spotted the tablet’s full specifications on the e-commerce site. Aside from that, the Moto Tab G70 tablet’s Flipkart listing gives us a glimpse of the device’s design in the form of images. The Tab G70 doesn’t seem to follow in the footsteps of the previously launched Moto Tab G20 as far as the outward appearance is concerned. Unlike the Tab G20, the Tab G70 adopts a mid-range design. To recall, the Moto Tab G70 has already passed through Geekbench and BIS certification websites.

Upfront, the Moto Tab G70 will sport an 11-inch LCD 2K display that delivers a resolution of 2000 x 1200 pixels. Furthermore, this HD-certified panel delivers a peak brightness of up to 400 nits. It comes with OTT apps comprising high-quality content. Aside from that, the G70 has a quad-speaker setup that supports Dolby Atmos for a superior entertainment experience. The tablet uses a MediaTek Helio G90T SoC that clocks at 2.05 GHz. Moreover, it ships with 4GB of RAM and offers 64GB of onboard storage capacity. This built-in storage can be further expanded up to 1TB using a microSD card. 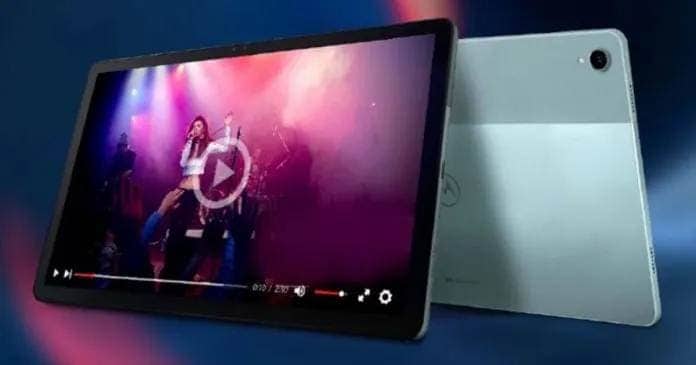 The tablet draws its juices from a robust 7,770mAh battery that offers 20W fast charging support. For optics, the G70 houses an 8MP front shooter for capturing selfies and video calling. Likewise, the rear panel has a 13MP camera. Aside from that, the Tab G70 runs Android 11 OS, providing a near-stock experience. The tablet also offers multiple connectivity options like Bluetooth 5.1, LTE, 2.4GHz & 5GHz, and Wi-Fi 802.11 a/b/g/n/ac. The tablet comes in a Modernist teal color option.

Other notable features include dual-microphone, TUV certified for eye protection, and Google Kids Space. Aside from that, the Tab G70 offers an IP52 water repellent design and Google entertainment space. Moreover, the Flipkart listing suggests that the tablet will have pogo pins for keyboard connection. In other words, Motorola could be prepping to announce more accessories. Lastly, the Tab G70 tablet will be available in Wi-Fi+LTE and Wi-Fi-only models. The tablet’s dimensions are 258.4 x 163 x 7.5mm, and it weighs 490 grams.

Previous A New Pixel Phone Tipped To Launch In India, Could Be The Pixel 6a