Motorola brought a plethora of smartphones the last November. Namely, the company unveiled the Moto G31, Moto G41 5G, Moto G71 5G. However, not all these devices have made their way to the Indian market. The missing piece, the Motorola Moto G71 5G is finally entering the sub-continent in the next week. The confirmation comes from Motorola, and according to the company, the Moto G71 5G will hit the market on January 10. Starting next week, the customers in India will have the company’s top offering for the mid-range market. This leaves Motorola free to plan its next big thing, the Moto G72 5G.

Unfortunately, the company didn’t reveal the pricing info of the upcoming device. However, it has confirmed a partnership with Flipkart to sell the new smartphone. It will be sold in the country in the Green and Blue colorways. 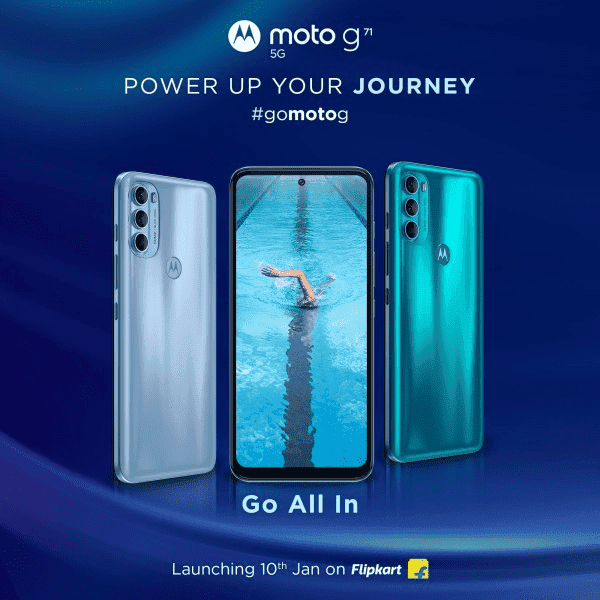 Since the device is already available in some markets, we already know what it has in tow. For instance, the Motorola Moto G71 5G boasts the Qualcomm Snapdragon 695 5 SoC. Qualcomm unveiled this chipset earlier this year, and it’s not widely available yet. That said, the G71 5G will become the first Indian smartphone to boast this platform. It’s made on the 6 nm process and brings 5G connectivity. However, there is still not much use for this connectivity in India, but that may change soon.

The Moto G71 5G flaunts a 6.4-inch Full HD+ AMOLED screen with a punch-hole in the center. The cutout serves as a home for the 16 MP selfie camera. Moving around to the back, we have a fingerprint scanner. Moreover, there is a triple-camera system with a primary 50 MP snapper, an 8 MP ultrawide shooter, and a 2 MP macro unit. It’s cool to have an ultrawide snapper, as some mid-range and low-end smartphones are neglecting this unit in favor of a not so useful macro + depth combo.

Under the hood, the Snapdragon 695 is aided by 8 GB of RAM and 128 GB of Internal Storage. In terms of software, the device is outdated in running Android 11. Motorola is not very concerned with Android upgrades as it is only promising one update for its flagships. Anyway, the Moto G71 5G should be updated to Android 12 sometime this year, and that’s all. Don’t expect further updates to Android 13.

In terms of design, the Moto G71 5G packs a water-repellent design that should allow it to withstand raindrops and some places. The device has a 3.5 mm headphone jack and 5,000 mah battery with 30 W Fast-charging support.