Almost one year has passed since the first rumors pointing to the Galaxy S21 FE release. Although the device started to appear in the rumor mill much ahead of its release, its launch took longer than previously expected. Samsung passed through multiple “considerations” before launching this device which was reportedly expected for September-October 2021. The crisis in the components shortage also affected this device, but the company managed to reveal it one month ahead of the Galaxy S22 series release. The new handset comes to fill the gap between the S21 and the S22 series, but we don’t know if it will be much relevant at this point, especially when not everyone is a fan of the Exynos 2100 SoC. Despite the doubts, the Samsung Galaxy S21 FE is now available in the Indian market.

The Samsung Galaxy S21 FE comes in a busy season for the Indian market. The device packs the Exynos 2100 SoC in India while the US variants get the Snapdragon 888 SoC instead. We know that not everyone will appreciate this chipset’s choice. However, Samsung still wants to push its in-house made chipset forward and we can only get used to it. Samsung’s 2021 chipset comes accompanied with 8 GB of RAM and 128 GB of Internal Storage with the base variant, or 8 GB of RAM and 256 GB storage in the high-tier version.

The Samsung Galaxy S21 FE packs a 6.4-inch Full HD+ AMOLED display with a 2,400 x 1,080 resolution. It also has an in-display fingerprint scanner. Worth noting that this is a Dynamic AMOLED display which means that the display can dynamically change between 1 Hz and 120 Hz refresh rates to conserve energy. The panel uses a punch-hole at the center for the 32 MP selfie camera. 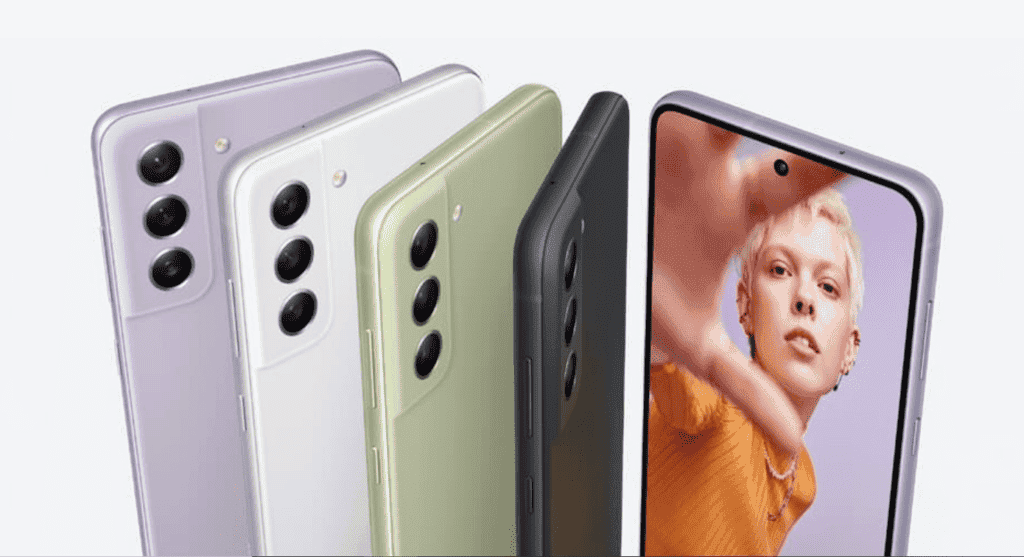 Moving around to the back, we have a rectangular camera island comprising a triple-camera setup. The main camera is a 12 MP snapper with optical image stabilization (OIS) and a bright f/1.8 aperture. The secondary camera also is a 12 MP module with a 123-degree field of view ensuring ultrawide shots. Last but not least, we have an 8 MP telephoto camera with 2 x optical zoom and up to 30 x space Zoom.

The handset draws its powers from a 4,500 mAh battery with support for 25 W fast-charging. It’s seriously slow when we compare it to other flagship and even to mid-range smartphones in the market. However, Samsung is not really concerned about winning the fast-charging race. At least, the device comes with 15 W wireless charging. While not fast, wireless charging is still something that separates high-end from intermediary smartphones. The device comes with IP68 certification and runs Android 12-based One UI 4.0 straight out of the box.

The S21 FE comes in two storage options in India. The basic variant with 128 GB of Storage costs INR 49,999. The high-tier version with 256 GB will set you back by INR 53,999. The device is available in Olive, Lavender, White, and Graphite colorways.

Galaxy S22 Plus and S22 Ultra will bring 45W fast-charging