Recently, MacRumors quoted a Reddit user who said that it’s now possible to use Microsoft Xbox to join Apple FaceTime calls from the TV. But this feature is not yet available on Apple TV.

In the post, the Reddit user explained how he could use the Xbox to make FaceTime calls on the TV. A simple setup involves using a Logitech C930 webcam connected to an Xbox Series S. To join a FaceTime call, the user simply opens the Microsoft Edge browser on the Xbox. Afterward, he navigates to the email provider and opens the email with the FaceTime link. 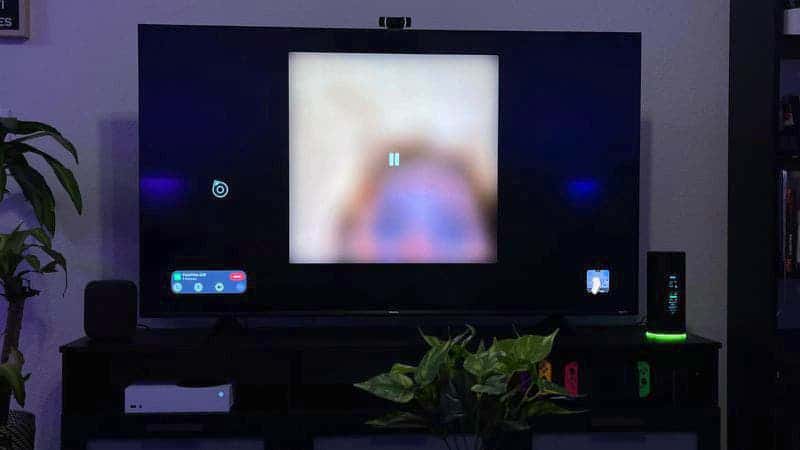 Thanks to the FaceTime link, this setting can theoretically be implemented from any device that has Google Chrome or Microsoft Edge browser installed. As a reminder, Apple introduced FaceTime Link in iOS 15, iPad OS 15, and macOS Monterey last year. It allows users of non-Apple devices like Android smartphones and Windows PCs to join a FaceTime call without the need for a dedicated app.

Since Apple TV doesn’t have a FaceTime app, an extra port to connect a camera, or a browser to open a FaceTime link, Apple’s own TV devices are completely incapable of making FaceTime calls. The only option for Apple TV users is to make a FaceTime call from another device is AirPlay. But during the call, the video content will still be streamed from the camera of the host device. Thus, it won’t make sense.

After discontinuing the HomePod in March 2021, we learned that Apple is developing a new connected TV box with an integrated HomePod speaker and FaceTime camera. But as Bloomberg said this product is still in the early development phase and there is no launch date specified for it. It might even never see light.

Anyway, if believing in this rumor, this product ought to offer some features users would expect from an Apple TV box. Among them, we can mention access to video streaming apps and games consoles, smart speaker features, and a camera for smart home security.

Honestly, this combination seems to be a natural evolution. For instance, at the moment, you have to hold down the mic button on the remote of the Apple TV to talk to Siri. But it would be way easier if the Apple TV was simply always listening.

Previous An iOS 15 bug forces iPhones to restart in a loop, how to fix the problem?

Microsoft profits soar 48% in last quarter due to Xbox, Office and the cloud