Google Pixel Watch possible launch date has been tipped, despite the lack of any official confirmation from the search engine giant. If rumors making the rounds online are anything to go by, Google is hard at works on a Pixel smartwatch. Furthermore, past leaks claim that the premium wearable was originally set to launch in the US alongside the Pixel 6 smartphone. Regrettably, this speculation didn’t come to fruition. However, the rumor mill continues to churn out speculations surrounding the Pixel Watch launch date, which will reportedly be announced in 2022.

As mentioned, Google has neither confirmed nor denied these rumors. In fact, the tech behemoth is still mum on its plan to even launch a Pixel smartwatch. Nevertheless, the purported Pixel Watch has been subject to multiple leaks lately. To recall, some official-looking Pixel Watch renders showcasing a bezel-less design were spotted online last month. Now, a new leak has shed more light on the Pixel Watch unofficial launch date. So, let’s check out the much-awaited Pixel Watch leaked specifications and launch date.

The Google Pixel Watch could launch in H1 of 2022. Noted leaker Jon Prosser further narrows the launch timeline, claiming the Pixel Watch launch date is set for May 26. However, the leaker points out that Google has a reputation for postponing release dates of its products. In other words, the Pixel Watch launch date could heavily rely on the developments. According to a report from NotebookCheck, the launch timeline could be set anywhere between now, and the end of spring. To recall, I/O conferences have been hosted in May since 2015.

I’m hearing that Google is planning on launching it on Thursday, May 26th — over year since we leaked it.

This is the first we’ve seen a set date on the device behind the scenes.

Google is known for pushing back dates — but if they do, we’ll know 👀 pic.twitter.com/Kk0D4Bom6d

Last year, Prosser gave Pixel fans their first look at the Pixel smartwatch. Aside from that, the smartwatch’s Marketing images had popped up on the internet not too long ago. Interestingly, details highlighted in the Marketing images corroborated the previously surfaced design renders. If the leaked pieces of information are anything to go by, the Pixel Watch will be a premium wearable. Furthermore, it will sport a round display, and adopt a bezel-less design. Internally, the smartwatch is referred to as “Rohan.”

The Pixel Watch will reportedly come in two color options including Black and Silver. Aside from that, past leaks suggest that the company will offer around twenty different types of straps for the Pixel Watch. Furthermore, the watch will reportedly run the company’s own WearOS smartwatch OS straight out of the box. The right spine will feature a crown that will enable users to navigate the UI. The left edge will have a microphone cutout. A leaked marketing image showing the UI implies that the watch will offer heart rate monitoring support. 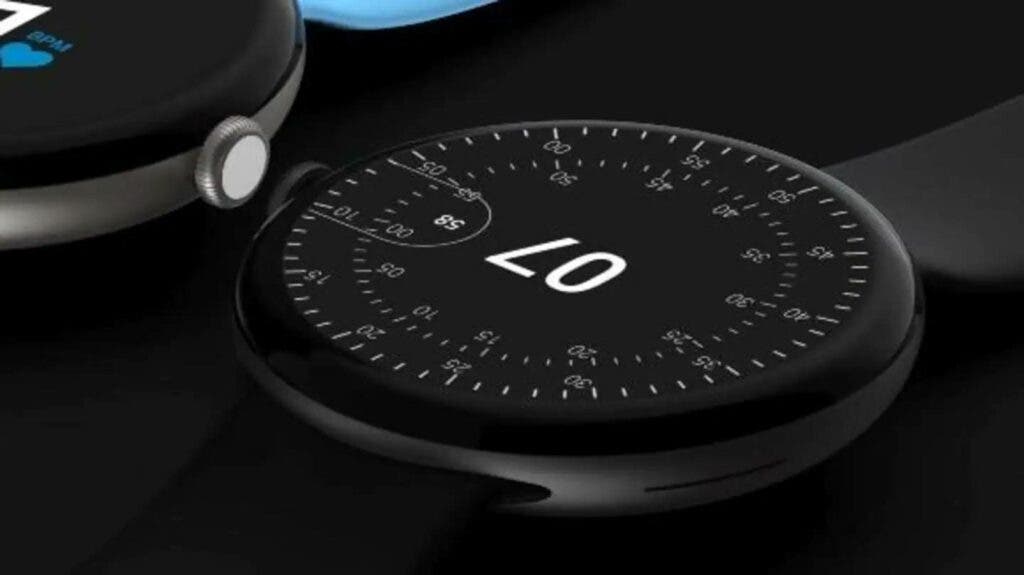 In addition to that, another marketing image hints at an integrated Google Maps route. In other words, the Pixel Watch will support navigation. Regrettably, other key details about the watch are few and far between at the moment. However, Google is likely to divulge at least some vital piece of information about the Pixel Watch in the coming days.