Starting from the Xiaomi Mi 10 series, the company has launched a top-notch smartphone every year namely “Ultra”. Until now, there have been two Ultra models – Xiaomi Mi 10 Ultra and Xiaomi Mi 11 Ultra. As the name implies, it represents the highest level of Xiaomi’s flagship at the time. In other words, it shows what Xiaomi is capable of. We can say the same for the forthcoming Xiaomi Mi 12 Ultra. But will it be called so? According to the latest leaks, no.

Today, LetsGoDigital showcased new custom-made renders of a Xiaomi phone dubbed the Xiaomi Mi MIX 5 Pro. What’s more surprising, they said this is going to be the most powerful phone in the company. In other words, Xiaomi ought to demonstrate muscles through the Xiaomi MIX 5 Pro instead of the Xiaomi Mi 12 Ultra.

Well, as we can see, the phone will use a super-large Oreo lens module. It has been leaked on the net before. However, at that time, we were thinking that this was the rumored Xiaomi Mi 12 Ultra.

Also, it is worth noting that this high-end flagship seems to come with a mobile imaging system jointly created by Xiaomi and Leica. Yes, this is the same company that has had deep cooperation with Huawei. But as the latter is under the bans, Leica found another partner in the mobile field. 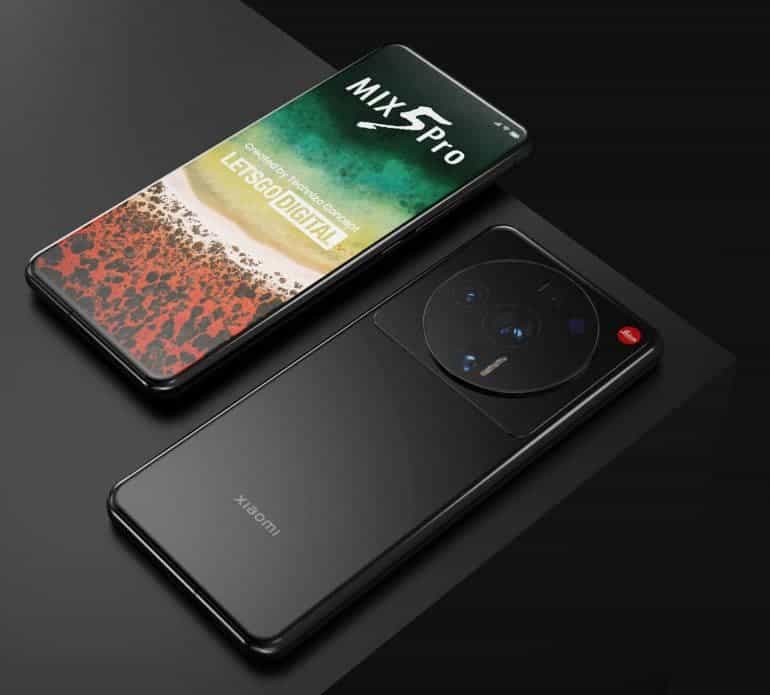 In fact, this cooperation should be beneficial for both. Leica will help Xiaomi to feel more confident in the premium smartphone market. As for Leica, Xiaomi’s customer base is a fertile ground to test and improve its imaging technologies.

Anyway, from the renders, we can see the Xiaomi MIX 5 Pro uses an under-screen camera that has been seen on the Xiaomi Mi MIX 4. Thus, it will adopt a genuine full-screen appearance with no bangs and holes.

If you remember, last year, the Xiaomi MIX 4 debuted the company’s under-screen camera technology. It adopts a new pixel arrangement scheme and a special circuit design to hide more components under the screen. So, it further improves the light transmittance of the under-screen camera area.

As it’s already commercially available, that’s logical that Xiaomi will continue launching true full-screen smartphones with this technology on board. Also, as the Xiaomi MIX series represents the company’s pursuit for full-screen design, there is no reason to develop two models with identical goals. We mean Xiaomi might cancel the Ultra in favor of the Xiaomi MIX 5 Pro.

Previous How to start using WhatsApp: A simple guide for beginner's