Realme started its Realme 9 series, after a long time of waiting, with the release of the Realme 9i. Now, the company is gearing up to introduce the Realme 9 Pro and Realme 9 Pro+. The two models have been targets of multiple leaks in recent times. Both devices will pack 5G connectivity, AMOLED displays with a high refresh rate, and other features. The new devices will hit the market in the next month, and even the company’s CEO, Madhav Sheth, has teased the Indian launch. Today, the Realme 9 Pro+ 5G is taking to the headlines again due to a visit to the Geekbench benchmark database.

The 9 Pro+ 5G variant passed through the Geekbench benchmark. As usual, the popular platform reveals and confirms some of the devices’ key specifications as well as software information.

The Realme 9 Pro+ (RMX3393) will pack an Octa-Core Dimensity 920 SoC. The handset will also pack an 8 GB of RAM, but this is for the particular version that ran Geekbench. We assume that there are other variants as well. In terms of storage, the 9 Pro+ 5G will run Android 12 straight out of the box with Realme UI 3.0 on top. This is a major surprise, after all, the Realme 9i was released with the outdated Android 11 version and Realme UI 2.0. 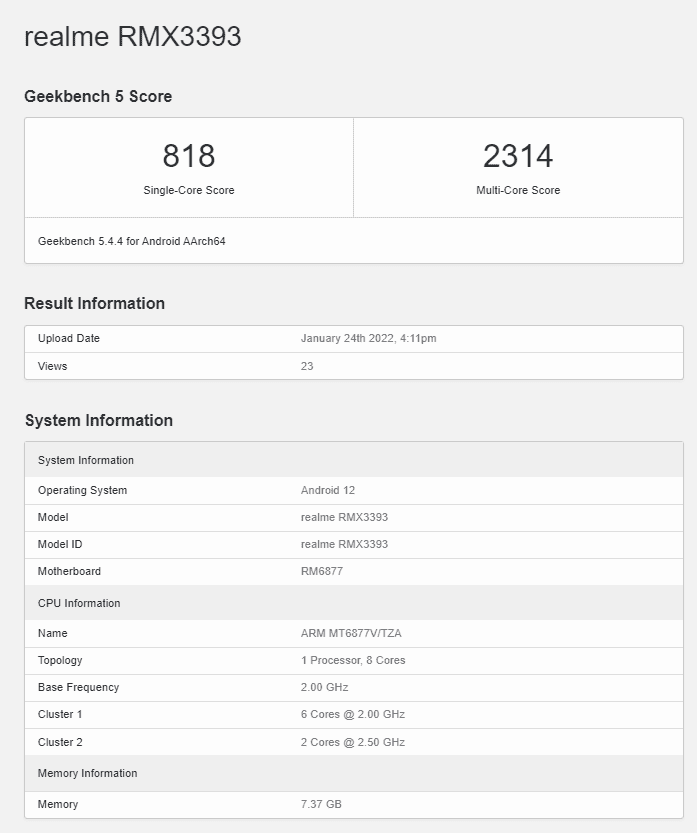 In addition to Geekbench, the Realme 9 Pro+ 5G also acquired FCC and NBTC certification ahead of the launch. The FCC certification reveals that the handset will have a 4,400 mAh battery capacity. It also has 65 W fast-charging, Bluetooth, 5G connectivity, and dual-band Wi-Fi.

The Pro+ 5G will boast a 6.43-inch AMOLED display with a Full HD+ resolution with a 90 Hz refresh rate. The handset will also come with a triple-camera setup. it will comprise a 50 MP main camera, an 8 MP ultrawide snapper, and a 2 MP macro shooter.  The device will also bring an in-display fingerprint scanner and a top-left punch-hole camera with 16 MP resolution.

The Realme 9 Pro has similar specifications but will switch the Dimensity for a Snapdragon 695 SoC. It also has a toned-down 33W charging.