There have been some attempts to make a completely holeless smartphone. The Meizu Zero was announced in 2019 and it is the world’s first phone with no physical buttons, speaker cutout, SIM slot, or USB port. This smartphone uses an eSIM (electronic SIM). The current trend does not involve an eSIM, it involves an iSIM (integrated SIM). In this technology, the SIM card will be integrated with the processor of the smartphone. If iSIM technology can be applied to smartphones, will the SIM card’s exit be far behind?. Today, Qualcomm announced that it has partnered with Vodafone and Thales to incorporate the functionality of a SIM card into the device’s main processor. It is worth noting that this is the world’s first demonstration application of iSIM technology on a smartphone.

Today, Qualcomm used the Samsung Galaxy Z Flip3 5G for its technical demonstration. This smartphone uses the Snapdragon 888 5G processor and Qualcomm had to modify the chip. According to Qualcomm, when this technology is commercial, it will roll out to many new devices that use iSIM connectivity for mobile services.

However, it is important to note that the new iSIM standard is based on eSIM. iSIM is the direct integration of SIM technology into the main chipset of the device. Its key feature is to eliminate the physical space requirement of the SIM card. It also combines the advantages of eSIM, including remote SIM configuration for operators, stronger security guarantees, etc. 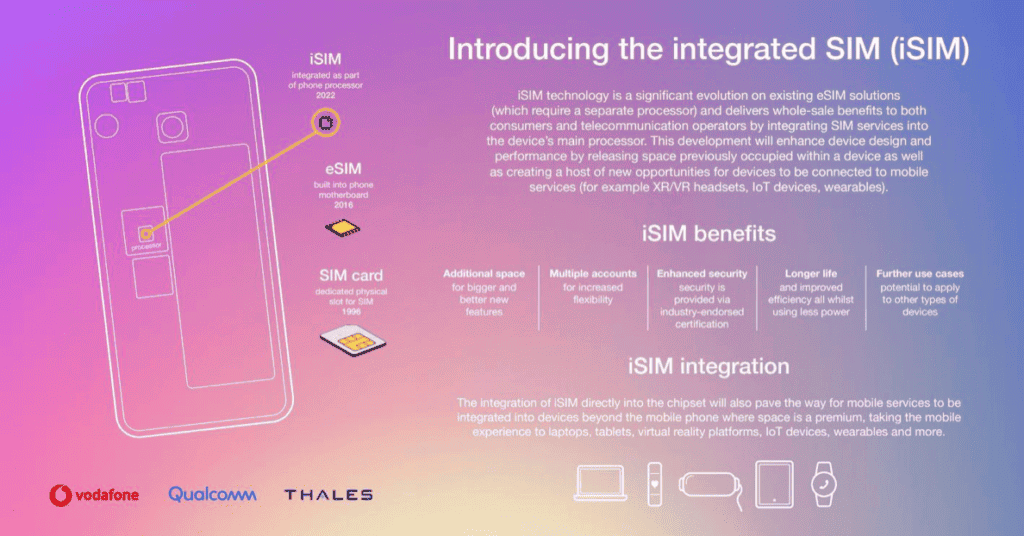 Before today, there was not much information regarding the iSIM technology. However, Qualcomm’s event has revealed a lot of information. According to Qualcomm, here are the top application advantages of iSIM technology

As early as three years ago at the MWC19 Shanghai exhibition, Qualcomm showed a demonstration of iSIM technology. At that time, the Qualcomm Snapdragon mobile platform demonstrated that the integrated security module can directly “simulate” the SIM card. The encryption, authentication, and storage functions are purely software-based solutions.

In fact, Qualcomm is not the first manufacturer to propose the idea of ​​implementing iSIM. As early as 2018, ARM disclosed its iSIM technology. By integrating a SIM card in an ARM-based SoC, electronic devices such as mobile phones can communicate with operators.

The iSIM technology announced by ARM includes the Kigen OS system and independent hardware blocks for secure encryption. It also integrates the application processor, baseband chip, and SIM card in the mobile phone into a single chip.

It is not difficult to see from the measures that major chip manufacturers are actively promoting iSIM technology. iSIM is a technology that conforms to the future development trend and has the potential to replace physical SIM cards and eSIM.

Regular SIM Vs eSIM Vs iSIM

For most users, physical SIM cards are still the only option in their electronic devices. With the evolution of functional phones to smartphones, SIM cards have also changed from ordinary SIM cards to Nano-SIM cards. The size has become significantly smaller (from 25mm x 15 mm x 0.8 mm to 12.3mm x 8.8mm x 0.7mm).

But even so, Nano-SIM cards still take up a lot of space in electronic devices. In smart wearable devices such as watches and glasses, physical SIM cards are even more of a “big Mac”. In order to cope with this dilemma, in early 2016, the GSM Association released a programmable SIM card, the eSIM card, mainly for wearable devices, IoT, and flat light devices. Unlike a physical SIM card, eSIM can be directly integrated into the device. It eliminates the need to reserve a card slot in the terminal device and reduces the issues of poor contact, easy loss, and damage. Not only that, users can download the number corresponding to the eSIM remotely. This allows you to switch operators at will and reduces the security risk of SIM card duplication.

To some extent, eSIM and iSIM share similar characteristics. The major difference is their built-in strategy – an eSIM is a dedicated chip connected to the processor, but an iSIM is embedded in the main SoC. The iSIM has a higher level of integration than the eSIM. No doubt, eSIM, and iSIM have more advantages than physical SIM cards. However, from the perspective of the application, eSIM, and iSIM is not high, especially the latter.

Game between chip manufacturers and operators

iSIM complies with GSMA (Global System for Mobile Communications Association) specifications and allows for increased memory capacity, enhanced performance, and higher system integration. With the introduction of iSIM cards, instead of requiring a separate chip like eSIMs, it eliminates the space for SIM services and embeds it on the processor.

If iSIM goes commercial and chip manufacturers integrate SIM card functions into SoCs, users can switch operators at will. This means that operators will naturally lose the ability to control users and traffic. Obviously, this is a scenario that operators don’t want to see. Operators will do everything possible to make sure that iSIM does not materialize.

The trend of any technological development never stops for the interests of certain groups. According to Counterpoint Research data, by 2025, nearly 5 billion consumer electronic products will support iSIM. The main application devices will be smartphones, smartwatches, CPE (customer equipment), etc.