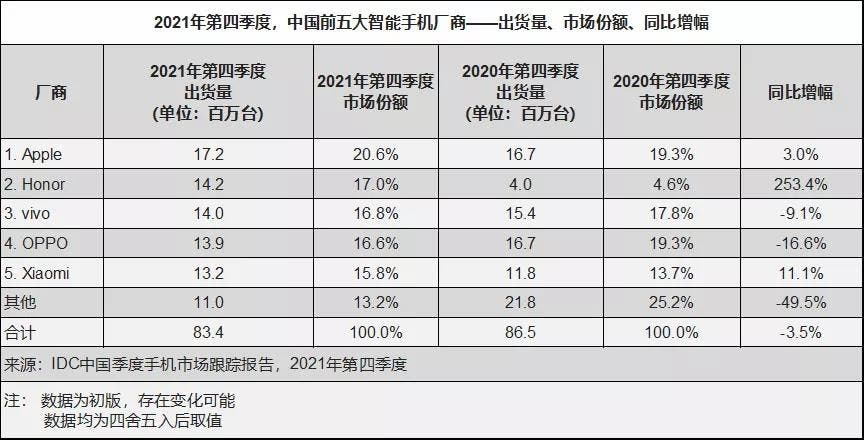 From the list, we can see that Honor is the second-largest manufacturer after Apple. Furthermore, with its 14.2 million units shipments and 17% market share, Honor is the largest Chinese smartphone brand in the Chinese market in Q4 2021. Honor’s performance represents a year-on-year increase of 253.4%.

IDC said that the Honor’s strong growth momentum continued in the fourth quarter. Honor’s growth is basically driven by new products such as the Honor 60 series and X30 series in December. After the adjustment period in the first half of the year, Honor has achieved obvious results in its product strategy. The company is currently focusing on the mid-to-high-end market. The “popular products” dominated by the Honor 50 series have helped Honor to always occupy a dominant position in the market.

In terms of annual data, the top five manufacturers in China’s smartphone market in terms of shipments in 2021 are Vivo, Oppo, Xiaomi, Apple, and Honor. Among them, Apple’s shipments in the Chinese market in 2021 have once again exceeded 50 million units since 2015. This is a year-on-year increase of nearly 40%, the fastest growth rate among the top five manufacturers. Honor’s annual shipments reached 38.6 million units, a slight increase compared to 2020. 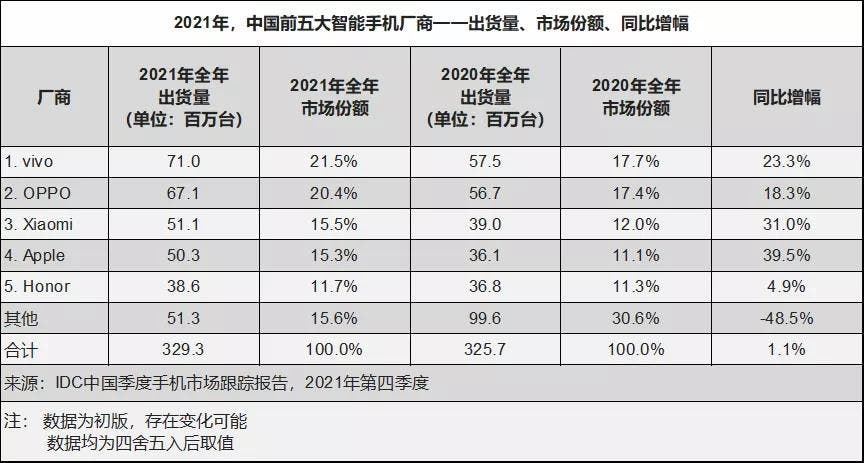 Chinese manufacturers will take a break during this holiday, but after it ends, we will have a series of announcements. On February 28, the annual MWC exhibition starts, which will last until March 3. A large number of notable market players will take part in it, and Honor will be among them. On the very first day of the exhibition, it will arrange its event called “The Power of Magic”.

It is easy to guess that in Barcelona the company intends to show devices of the Magic series. It can be a foldable smartphone Magic V, a MagicBook laptop or other novelties from the series of the same name. Also, it is possible that the company will also arrange the announcement of the global version of Honor Magic 3. There is a month left before the presentation, and during this time the company can release several teasers that will clarify the composition of the exhibitors from it.

Next Redmi 10A passes by Geekbench and FCC, key specs revealed