The pandemic continues its spread on the planet, continuing to affect the technology sector. But the crisis and the shortage of components, although it had an impact on the industry, it continued to recover. This conclusion was made by International Data Corporation (IDC) experts after analyzing the smartphone market for all of 2021 and the fourth quarter of last year.

Between October and December 2021, 362.4 million units were sold worldwide compared to 374.3 million a year earlier. The leader was Apple, which controlled 23.4% of the mobile device market. In quantitative terms, this is 84.9 million iPhones sold. Coming in second is Samsung, which sold 68.9 million smartphones in the fourth quarter and accounted for 19%. 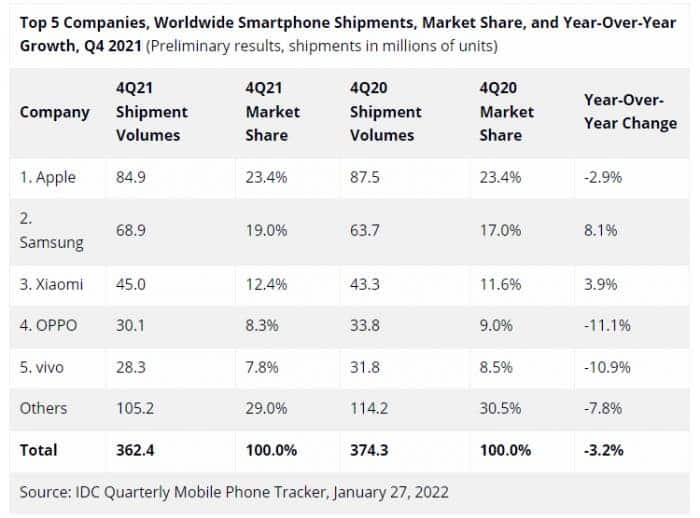 Third was Xiaomi with 45 million smartphones and a market share of 12.4%. Oppo and Vivo managed to break into the top 5, and their share is at 8.3% and 7.8%, respectively.

According to the results of work for the whole of 2021, smartphone sales increased by 5.7%. In total, 1.35 billion units were sold against 1.28 billion a year earlier. The title of the largest smartphone manufacturer managed to keep Samsung with a share of 20.1% and 272 million mobile phones sold. The second was Apple with a score of 17.4% and 235.7 million iPhones sold, the third place went to Xiaomi – 14.1%, which grew more actively than other companies – an increase of 29.3%. 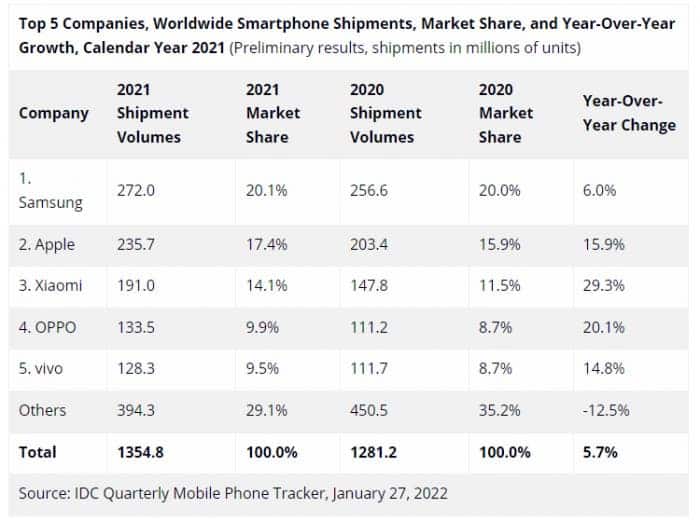 “There’s no question the second half of 2021 failed to meet expectations; with volumes declining 4.5% compared to the second half of 2020;” said Ryan Reith, group vice president with IDC’s Worldwide Mobile Device Trackers. “As we mentioned last quarter, the supply chain and component shortages started to have meaningful impact on the smartphone market as we entered the second half of the year, and this continues to be the case as we’ve now entered 2022. We expect to see supply and logistical challenges continue through the first half of this year; but we currently believe we’ll return to growth in the second quarter and second half of 2022. There is no question that demand is still strong in many markets; and to some extent we are seeing increasing consumer interest in 5G and new form factors like foldables.”

“The fact that 2021 would have come in drastically higher if it were not for the supply constraints adds even more positivity to the healthy 5.7% growth we saw for 2021,” said Nabila Popal, research director with IDC’s Mobility and Consumer Device Trackers. “To me it gives a message that there is significant pent-up demand in almost all regions. Even in China, where there are some challenges around weakening consumer demand; the market performed much better in the fourth quarter than expected, 5% better to be exact, albeit still a year-over-year decline. With channel inventory low in almost all regions and as supply constraints ease up towards the middle of the year; IDC expects this pent-up demand to drive the market toward healthy growth in 2022.”

Previous Lei Jun is no longer the head of Xiaomi: What's happening?

Top 24 countries whose citizens are most addicted to smartphones