Strategy Analytics has published quarterly and annual statistics on the global laptop market. Analysts warn of difficulties with the supply of laptops.

In the last quarter of 2021, global laptop shipments were approximately 68.0 million units. This is 1% less than the result of a year ago. The reduction is due to the global shortage of electronic components, the disruption of supply chains and the rise in product prices.

The largest market player is Lenovo with a share of about 24% in the last quarter. In second place is HP Inc., which showed a result of 21%. Closes the top three Dell with 19%. In addition, the top five included Apple and Acer with 10% and 8%, respectively.

Notebook PC market finished stronger during holiday quarter despite of the shortage of components and supply constraints, the notebook PC market delivered another great quarter with 2% growth over September quarter. Premium products gained momentum due to commercial demand for Windows 11 and growth of DaaS (Device as a Service), while consumer spending also increased due to higher holiday discounts on premium products (such as Ultramobile and gaming notebooks). 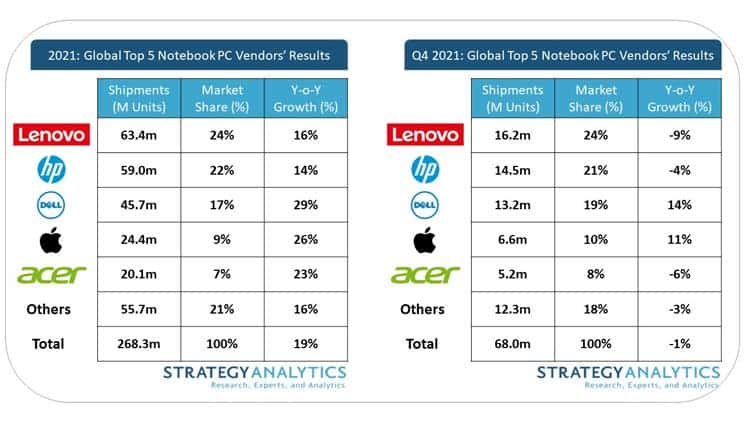 In 2021, 268.3 million portable computers were in sale worldwide, and growth was an impressive 19%. Good demand took place in the corporate segment, including due to the release of Windows 11.

Lenovo took first place: the company controls 24% of the market. HP Inc. and Dell at the end of the year showed a result of 22% and 17%, respectively. About 9% is occupied by Apple, and the share of Acer was 7%.

Chirag Upadhyay, Industry Analyst said in a statement, “This was another strong quarter for notebooks, capping an end to another strong year. The continued demand of hybrid work environment supported the developed market’s growth which was also driven by Window 11 and DaaS attractive price offerings. Emerging markets are driven by continued demand from small and medium businesses whilst consumers continue to shift towards mobility. Also, delayed orders from Q3 2021 due to component shortage and supply issues were fulfilled in the fourth quarter.”arket share during the pandemic. Windows also remained the popular choice for consumers as gaming notebook PC demand continued during holiday season”.

Previous Realme 9 Pro + will monitor the health of the user