The fact that we are waiting for the announcement of the Realme 9 family has been talked about for a long time and persistently. Everything goes to the fact that the presentation of Realme 9 Pro and Realme 9 Pro +, which should take place on February 15, will not bring surprises. We will know about the new products even before their release. And this is due not only to network insiders but also to the company itself.

Today, the manufacturer posted a teaser on the network, which indicates that Realme 9 Pro + will be able to measure the owner’s heart rate. Judging by the image, the heart rate sensor is integrated into the display. Such a solution is not a novelty and there are already devices on the market that allow you to measure heart rate using a smartphone camera or a sensor built into the screen. A few years ago, Samsung installed a heart rate monitor on its flagships, but with the appearance of wearable gadgets, this practice was abandoned. 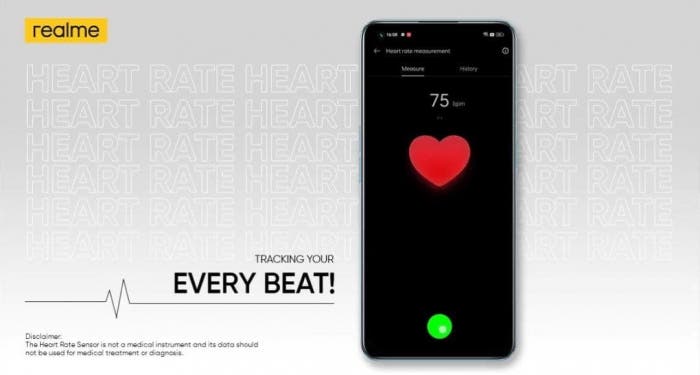 As per the leaked specifications, the Realme 9 Pro is coming with the Qualcomm Snapdragon 695 SoC. This is the very same chipset found inside of the recently revealed Redmi Note 11 Pro 5G. So these two devices will be fighting in the same class. Meanwhile, the 9 Pro+ will go for the MediaTek Dimensity 920 SoC. The Dimensity 920 is fancier than the Snapdragon 695; but we don’t know if this will be enough to make this device more appealing. According to rumors, these devices will have up to 8 GB of RAM and 128 GB of Internal Storage. However, they won’t bring a micro SD card slot. Of course, these latter controversial details still need confirmation.

The Realme 9 Pro has a huge 5,000 mAh battery, however, Realme is downgrading the fast-charging to 33W charging after two generations of Realme Pros with 65W. Apparently, this will be exclusive to the Realme 9 Pro+ which is touted with 65W charging. The downside is that it drops the battery down to 4,500 mAh. That basically says that we can’t have everything on a mid-range.

In terms of display, both devices have AMOLED panels. Curiously, the 9 Pro+ is smaller with a 6.43-inch panel and also has a slower 90 Hz refresh rate. Meanwhile, the Realme 9 Pro has a bigger 6.59-inch AMOLED with 120 Hz refresh rate. Both devices have in-display fingerprint scanners. The Realme 9 Pro+ does not really feel like a massive improvement over the regular Pro. Of course, it performs better and charges faster, but that’s it. Perhaps, Realme is making the OIS, which is exclusive to the Pro+, the big deal here.