Twitter is currently teeming with tweets featuring cryptic patterns of grey, yellow and green emojis due to the skyrocketing popularity of a new online puzzle game dubbed, Wordle. This is an online brainteaser, owned by The New York Times. Moreover, Wordle strikes a perfect balance between sudoku and a crossword puzzle.

How To Play Wordle? 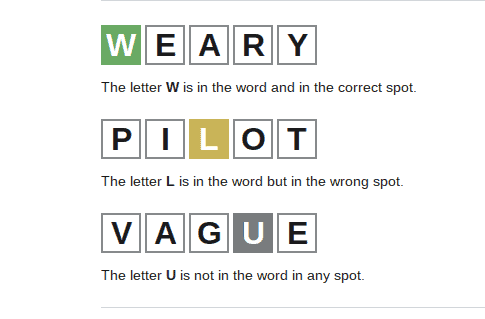 While you can enter a word as a guess, entering random letters, like vowels, isn’t allowed. In other words, you can’t crack the code by entering random letters. Moreover, you can head straight to the Power Language website to play Wordle. Regrettably, only one puzzle is released each day. So, you’ll need to check the website again the following if you want to continue playing.

You can choose to take on the puzzle on a hard mode. Furthermore, you can switch this option on or off by heading to Settings and then tapping the cog icon which is on the upper right-hand side. Here, you can even toggle between the default white theme and dark theme. Aside from that, you can pick a color blind mode in the setting. This mode offers high contrast colors.

Hard mode insists that “any revealed hints must be used in subsequent guesses”.

For instance, if you get the letters V and P correct in your first guess, you’d need to choose V and P in the same spot for your following guesses. Moreover, it is imperative to bear in mind that players have to play a real word, rather than jumbled letters. So, users who do not opt for a hard mode are likely to guess a completely different world without actually using any of the letters they’ve solved to guess the remaining letters. However, this is not possible in hard mode.

You probably have noticed a sudden influx of square green emojis on your timeline on Twitter. This could be because some of the accounts you follow are jumped in on the Wordle bandwagon. Furthermore, Twitteratis are sharing the number of tries it took for them to guess the secret word. The website allows players to share their results after they crack the puzzle. This share option features an emoji grid that looks like the color pattern of your completed puzzle.

Aside from that, the share option uses the green, yellow, and black emoji boxes. However, if you aren’t willing to share the results via the website, you can choose to share your results using the aforesaid emojis. This way, players can tweet their results without offering a spoiler. The results only show what number of Wordle it is, as well as the number of guesses they took. For instance, “Wordle 199 6/4.

Next Ericsson tries to block sales of Apple iPhone in Brazil

How to install the Wordle game on your smartphone