The shortage of components spurred the growth of incomes of chipmakers. They benefited from the current situation, began to sell more and, accordingly, earn more. In the last quarter of 2021, Qualcomm generated $10.7 billion in revenue and grew at an impressive 30% year-on-year. From the sale of mobile chips, the American chipmaker received $ 5.98 billion in revenue; which is 60% more than a year earlier.

Qualcomm’s net profit amounted to $3.4 billion, which is 38% more than in the last quarter of 2020. Demand for mobile processors increased by 42%. 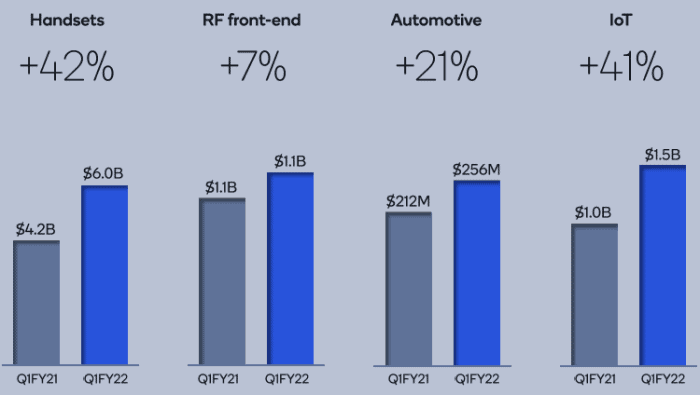 The company added on part of making a profit from the sale of automotive chips. Qualcomm earned $256 million from them and grew by 21% year on year. The IoT division, which specializes in low-power chips, increased sales by 41 percent to $1.48 billion. Against this background, Qualcomm’s business improved and in terms of royalties, it began to sign more agreements and income from them grew by 10%, and revenue amounted to $ 1.81 billion. It is clear that other lines of business increase the company’s revenue more actively than royalties from patents, the use of which is authorized to third parties.

There is a shortage, but Qualcomm profit from the sale of chips is growing 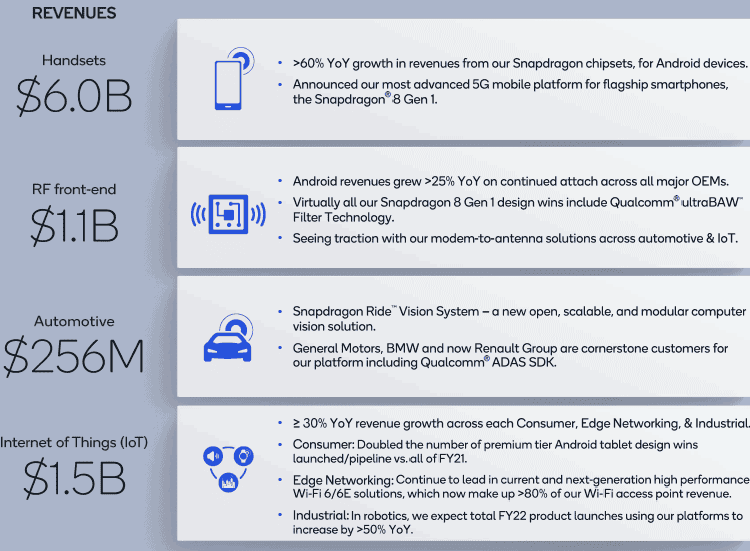 The QCT division, which is responsible for the development and supply of chips, increased revenue by 35% compared to the same period last year to $ 8.85 billion. The pace of revenue growth in this area slowed down compared to the same period last year, when it increased immediately by 63%. Qualcomm CEO Cristiano Amon said the positive quarterly revenue guidance reflects the company’s confidence in its ability to increase component shipments after successfully tackling chip shortages. On the other hand, he added, Qualcomm still feels that demand is outpacing supply, and could supply more chips if it could.

In the past quarter, Qualcomm’s revenue growth was driven by the supply of mobile processors for Android smartphones, which increased the company’s core cash receipts by more than 60%. In total, in the direction of smartphones, Qualcomm gained about $6 billion in quarterly results, 42% more than a year earlier. RF components increased their revenue by 7% to $1.1 billion, with Android devices growing by 25%.

Qualcomm’s automotive business is still content with a much more modest amount of revenue – $ 256 million for the quarter, but shows good dynamics in the form of revenue growth of 21%. The company has managed to attract large customers such as GM, BMW and Renault to its platforms for the development of active driver assistance systems. Finally, the Internet of Things direction increased Qualcomm’s core revenue by 41% to $1.5 billion.