This is quite disappointing considering the handsets have gained very good reviews. They pack Google’s Tensor chipset under the hood and house several rear-mounted cameras, that have garnered good reviews. While Google is still mum on its plan to unveil the Pixel 6 series, a seller has already listed the Google Pixel 6 Pro on Amazon India. Moreover, the handset carries a steep price tag.

The listing for the Google Pixel 6 Pro on Amazon India carries a hefty price tag of INR 1,04,000. However, it is worth mentioning here that the Pixel 6 Pro 5G retails globally for $899, which converts roughly to about INR 68,000. So, this INR 100K+ price seems quite unreasonable even after including import duty and taxes. Moreover, the phone comes with bank offers that you can avail of by using the Bank of Baroda and Axis Bank cards. Furthermore, the listing has the Fulfilled by Amazon tag. 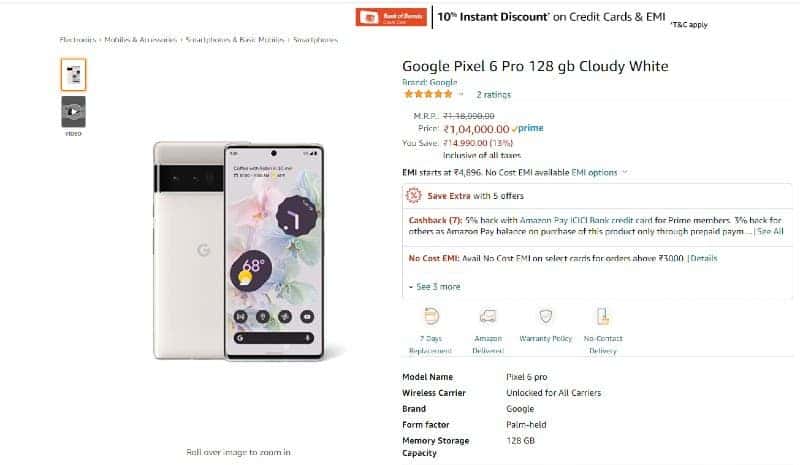 Aside from that, the listing offers a 7-day replacement option on the smartphone. This is similar to any other handset available on the e-commerce platform. The phone is been sold on Amazon India by Worldwide_Store. Interestingly, the seller has a considerably low positive rating of just 60 percent on Amazon India. Furthermore, most of the reviews on the Worldwide_Store page comprises feedback from highly dissatisfied customers. So, it is barely surprising that the seller has gained several 1-star ratings.

Also, the Pixel 6 Pro 5G listed by Worldwide_Store has received just two reviews. This is a sign that someone could be trying to sell an imported Google Pixel 6 Pro phone in India. Alternatively, this could be a fake unit. Moreover, since Google isn’t still selling the Pixel 6 Pro in India, the handset will come without an official warranty on it. Aside from that, it is worth noting that Google usually sells its Pixel phones in India via Flipkart. So, its availability on Amazon is questionable..

Considering these factors, it is highly likely to be a fake product. Furthermore, the handset could be a region-specific model, making it completely useless for an Indian consumer.

Next Xiaomi Civi gets second official price cut, now more affordable than ever