If you are an iPhone user, you should know that there is no native way to record calls (both incoming and outgoing voice calls). We understand that this is not anything difficult to do. But Apple, as a company that thinks of its users’ security the most, has decided to exclude this feature from iOS. When looking at the laws in different states, in most U.S. states, if one person gives consent, the call can be recorded. However, there are up to 11 states that require all parties of a conversation to agree to such an action.

Anyway, there are various apps allowing users to record calls. If you follow the rules and still need a call record, below we’ll show how. However, before acting, just get consent from the person on the other end of the line. You can just ask “I’m planning to record this, are you OK with that?”

The app that we are going to talk about is Rev Call Recorder. Mashable found it interesting, so we do. It’s an iOS app coming our way from a tech startup called Rev, which is based in San Francisco and Austin.

Our protagonist, the Rev Call Recorder iOS app has a simple interface and any user will easily interact with it. It allows users to record calls in a couple of clicks. Moreover, there are no restrictions for the type of call – incoming or outgoing. Once recorded, you can share it through Dropbox or email. Rev Call Recorder has more than 8.6 thousand ratings that give it an average of 4.4 out of five scores. What’s more important – it’s FREE!

Many may wonder why such a useful app is free. However, Rev’s main business is to convert audio and video to text with its paid-for transcription and captions service. So after recording the call, you can pay for a service that will transcribe it. It’s done by a skilled human transcriptionist and it costs money – $1.25 per minute.

How To Record Calls On iPhone?

To use Rev Call Recorder, search for it on App Store. Download the app (it will verify your number). By the way, it works only with country code +1 phone numbers. 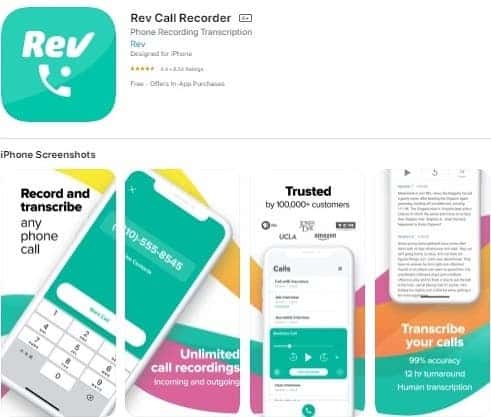 Once done, just tap the “Start Recorded Call” option at the bottom of your screen. 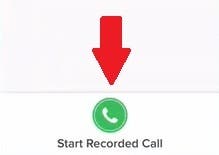 In the next step, you have to choose whether you’re making an outgoing call or receiving an incoming call.

After tapping Stop, your recording will be automatically saved to the list of your recorded calls. Simply tap on it to see what sharing methods are available.

Previous Samsung to open up the distant wireless charging technology