Apple has been working on VR and AR products for a while. This was a clear hint at what the world will change too. But no one has been paying attention to it. Recently, Facebook rebranded itself and became Meta. Thus, in the near future, the world we know will be turned upside down. As for the Chinese companies, Tencent is going to buy Black Shark, which will make VR hardware for the brand. Well, we guess you’ve already understood that all big names in the IT industry will try to grab their own piece of the pie (Metaverse). Recently, Google, Samsung, LG, and Alcatel tried but failed to make VR headsets for the mainstream. So similar products from Oculus (the same Facebook), Valve, HTC, and Sony are the only products that offer immersive gaming. But new players will join the race. Say, Motorola.

VR headsets do not go viral because there are many difficulties the companies should overcome. One of them is that they use too many components. In this regard, Motorola and Verizon seem to have found the solution. These two, today, announced a “5G Neckband”. The key advantage of this product is its separate design. The neckband will handle tasks related to connectivity, processing, and battery while allowing headset makers to focus on the VR headsets themselves.

As we can see in the photos provided by Engadget, the neckband is paired with a ThinkReality A3 headset. It comes out way from Motorola’s parent company Lenovo. However, the 5G Neckband will successfully pair and work with VR headsets of other brands as well. 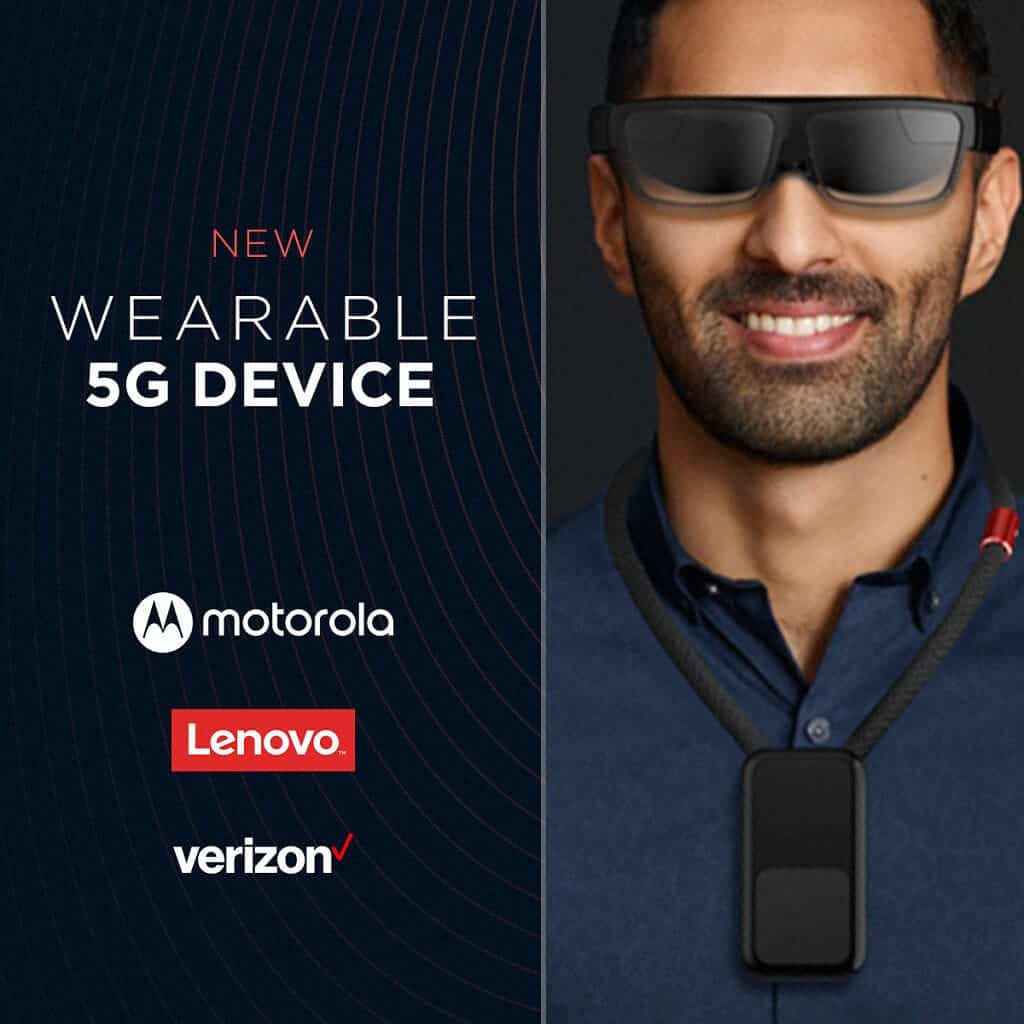 As said, the main advantage is that the collar and pendant can provide the brains of the operation for VR headsets. Apart from this, it will come with a number of antennas, helping make those experiences much more portable. “We’re making 5G wearable,” vice president of technology at Verizon Brian Mecum told Engadget.

In the photos, it looks like a necklace with a big pendant. Such a design shouldn’t cause many inconveniences – just imagine a camera bag is hanging around your neck.

In terms of design, the Motorola 5G Neckband comes in black with a red barrel on the right to connect to headsets. It is also compatible with Qualcomm’s Snapdragon VR platform and Microsoft’s Remote Network Driver Interface (RNDIS). Our protagonist also offers USB-C and DP1.4 connections.

The pendant comes with dimensions of 2.1 x 3.8 inches (54 x 97mm) and weighs 3.5 ounces (100 grams). The main processing unit sports a Snapdragon 8 Gen 1 processor, 5,000mAh battery, touchpad, SIM card slot, and charging light indicator. Of course, as it will work with VR headsets, there are myriads of sensors, including a gyroscope, accelerometer, barometer, and GPS. For connectivity, the product supports a 5G network. The corresponding antennas are embedded along the rest of the neckband. On the rear, we can find a trapezoid-shaped module weighing 2.6 ounces (75 grams). This module also contains antenna and stereo loudspeakers.

“We wanted to make it so it’s pretty indistinguishable to the user,” said Jeff Snow, Motorola’s general manager of product innovation. “They’ve got a smartphone always on them that’s always connected to these glasses.”

For the moment, Motorola and Verizon decided to share only these details. Thus, we don’t know when the Motorola 5G Neckband will go on sale and how much it will cost. Anyway, both are in talks with major partners including “already in place retail channels that are doing things in AR and VR,” Mecum said. Moreover, these companies are actively negotiating with “some sports leagues” and “something pretty big with education.”

“We took a smartphone and exploded it around your neck,” Mecum said. He’s very excited about the new product, “We don’t introduce new form factors or new compute platforms very often in the industry,” he said. “If we can make it easier for kids to learn and we can make it easier for people in sports leagues to learn,” he said, “without the complexity and friction of big heavy things around their head, it’ll change.”

Motorola and Verizon are not the pioneers in this field. Other brands have already tried to come up with something identical. However, they admit that products in this category need more data and time to experiment and understand whether it is the best solution for the VR headsets.

Lastly, we should understand that VR and AR products are not as popular as other devices such as smartphones. There are too many issues the manufacturers should solve. But this 5G Neckband is a clear sign that the brands are aware of existing problems and are working on them.

Meta will hire 2,000 staff for Spanish Hub aiming at a regional expansion