After much anticipation and countless leaks, Realme is finally close to revealing its Realme 9 Pro and Realme 9 Pro+ smartphones. The two devices will join the Realme 9i and complete the growing Realme 9 series. We also expect a vanilla Realme 9 5G to come at a later date, but for now, all the attention is on the Pro smartphones. Unlike previous years, these two devices are gearing to be decent upgrades. The Realme 8 Pro was a major disappointment for certain users, after all, it brought the exact same Snapdragon 720G from the Realme 6 Pro and 7 Pro. It also arrived with a 60 Hz refresh rate. Now, the 9 Pro and the newcomer 9 Pro+ come to address all past mistakes. Ahead of the launch, we got a new round of specs that leave not much to the imagination.

The Realme 9 Pro, brings the Qualcomm Snapdragon 695 5G SoC which is also much better than the Helio G95T on the old “vanilla” generations. The device has a 5,000 mAh battery with 33W fast charging. It will also bring a Light Shift design. The camera department gets an unnamed 64 MP camera, and we expect the usual ultrawide and macro combo. The display has a 120 Hz refresh rate, and more recent rumors suggest it’ll be an LCD one.

The company affirms the Realme 9 Pro+ will come with the MediaTek Dimensity 920 SoC. The teaser affirms that the 9 Pro+ will be Europe’s first smartphone with this particular chipset. Even though the teaser originates from Indonesia. The teaser also confirms camera specifications. The main snapper will be a 50 MP Sony IMX766 sensor with a 1/1.56 lens. The company even shared a comparison with the Pixel 6, Xiaomi 12, and the Galaxy S21 Ultra. 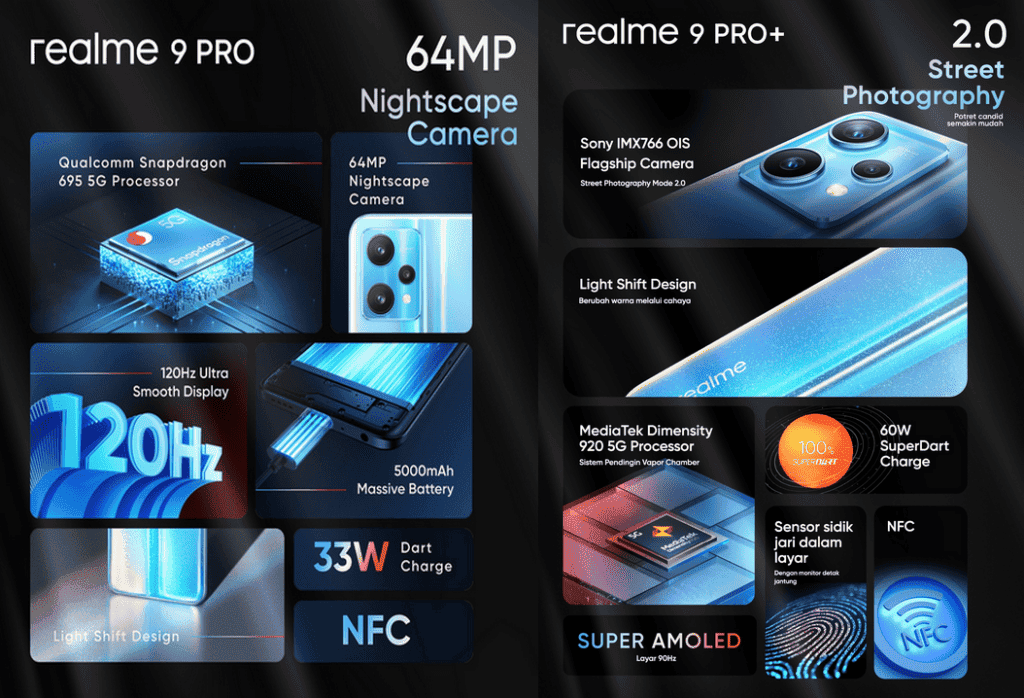 The Realme 9 Pro+ will also pack an AMOLED display with a 90 Hz refresh rate. Although it’s not a 120 Hz panel, it’s much better than the Realme 8 Pro that had an AMOLED with a 60 Hz refresh rate. The device also brings an in-display fingerprint scanner which probably explains why Realme didn’t bring a 120 Hz panel. The flagship-level biometric authentication feature also measures your heart rate, which is really interesting. It’s a Full HD+ panel with a top-left punch-hole if you want to know. The back brings the company’s already teased color-changing Light Shift design. However, there should be other simpler colorways. The device will bring 60W fast-charging, and the rumors say it has a 4,500 mAh battery.

Both devices will bring NFC and will run Realme UI 3.0 based on Android 12 straight out of the box. Recently, the devices had their prices tipped, and now with the key specs revealed, there’s no much left to the imagination.