The POCO M4 Pro 5G was announced globally in November last year. The device was a rebadged Chinese Redmi Note 11 5G with the iconic design of the POCO M-series. With a decent Dimensity 810 SoC and a 50 MP dual-camera setup, the device was well received. After months of waiting, the brand unveiled the smartphone in India early this week. Apparently, POCO is not done with the M4 Pro series just yet. As per previous rumors, the company is planning a POCO M4 Pro 4G variant. Today, this alleged version has passed through the Geekbench benchmark. Given the number of leaks popping out, we have strong reasons to see this as an imminent launch.

The POCO M4 Pro 5G comes for the budget 5G smartphone segment. However, if you want some of the specs, and design, with a less powerful chipset without 5G, the company is preparing a new variant. The budget 4G version has passed through the popular benchmarking platform. The handset comes with model number 2201117SI and has passed through the Geekbench website with an MT6781 processor. The model number for the MediaTek Helio G96 SoC. The same chip is also present in the recently released Redmi Note 11S. To those unaware, this chipset is a tweaked Helio G95T made to support higher refresh rates and more capable cameras.

Worth noting that a couple of days ago, another variant 2201117PG model number has passed by the benchmark with slightly different results. We assume that there will be distinct regional versions of this handset, and it won’t be a “specific market release”. 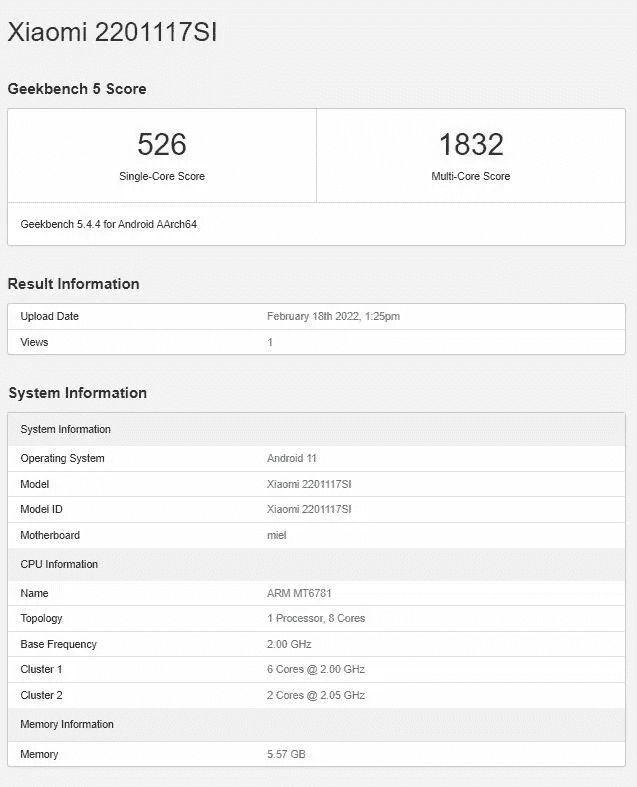 The Geekbench listing suggests a variant with 6 GB of RAM. However, given the nature of this smartphone as a budget offering, seems reasonable to expect a version with 4G of RAM. In terms of storage, we expect 64 GB and 128 GB that can be expanded through a micro SD card. Furthermore, the Geekbench listing reveals 526 points in the single-core tests and 1,832 in the multi-core department. The handset runs Android 11 straight out of the box. We can expect MIUI 12.5 or MIUI 13 to be running on top of the device. Obviously, it should be eligible for Android 12, but it’s impossible to determine when this update would come.

Unfortunately, other details such as camera specifications have not been revealed. Anyway, this handset seems to be just another of POCO rebrandings. In this case, a Redmi Note 11S rebranding. The exact reason is unclear, but we can expect similar specifications. As a result, the device may bring a 108 MP quad-camera setup, a 6.43-inch AMOLED display with a 90 Hz refresh rate. Last but not least, we’re expecting a 5,000 mAh battery with at least 33 W fast charging.

Next Nubia Z40 Pro passes by 3C certification, buyers will need to purchase a charger separately