Today, the Chinese brand has confirmed the key specs of the handset. A couple of new teasers confirm the presence of the Qualcomm Snapdragon 8 Gen 1 processor alongside the MariSilicon X NPU. To those unaware, the latter was unveiled in December last year during the company’s INNO Day 2021. It’s a neural processing unit that works to ensure the best photography in these flagships. 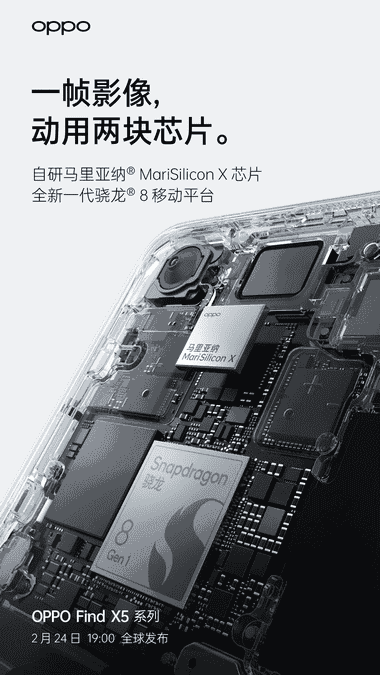 This is the first time that Oppo officially confirms the processor inside of its smartphone. Of course, the company has a long tradition of using Qualcomm flagship chipsets on its smartphones, but this time will be slightly different. Since the beginning of this year, we know that at least one of the Oppo Find X5 series will bring the Dimensity 9000. After all, MediaTek went ahead with Oppo to confirm this fact. However, much to our surprise, it seems that the Oppo Find X5 Pro will have variants with Snapdragon 8 Gen 1 and Dimensity 9000. We don’t know exactly how Oppo will split these variants, but the latter might come as Dimensity Edition. Previously, rumors have been pointing to the Dimensity 9000 on the vanilla variant, but it seems to be coming with the Snapdragon 888 or SD888+.

The Find X5 Pro global variant will feature a 6.7-inch AMOLED display with 2K resolution. The company will use the LTPO 2.0 technology for a variable refresh rate of 1 Hz to 120 Hz. The curved screen will also support HDR 10+ content.

Moving around to the back, we have a triple-camera setup. It comprises a primary sensor with 50 MP resolution, there is also a 50 MP snapper for ultrawide shots, and a 13 MP telephoto lens. For selfies and video calls, the phone brings a 32 MP Sony IMX709 snapper. The device will draw its powers from a 5,000 mAh battery with 80W SuperVOOC charging, and 50 wireless charging.