Nokia probably lost the appeal it had in its early days on Android. The brand that was promising with good smartphones failed to keep up with the competition. Now, instead of shipping premium mid-range smartphones, the HMD Global-controlled brand is launching low-end smartphones. For 2022, the company is already preparing a bunch of new mid-range and low-end smartphones contenders. Meanwhile, the brand is also working to bring Android 12 to its current smartphones. Previously, the upcoming Nokia 2.4, Nokia 3.4, and Nokia G10 had appeared on Geekbench running Android 12 OS. Now, it’s time for the Nokia 5.4 to make an appearance in the popular benchmark website running Google’s latest Android skin.

Nokia is honoring the legacy it established with its first Android smartphones and is bringing Android 12 to its current smartphones. The Nokia 5.4 is just the latest smartphone to pass through a benchmark with Android 12. Since Nokia smartphones run a very stockish Android experience, we have no doubts that the Nokia 5.4 will stay true to this legacy. So, we can expect the device to follow Android Material You guidelines rather than offering its own take of the theming engine. The new Android 12 also brings some quality-of-life improvements for many features and new security features. 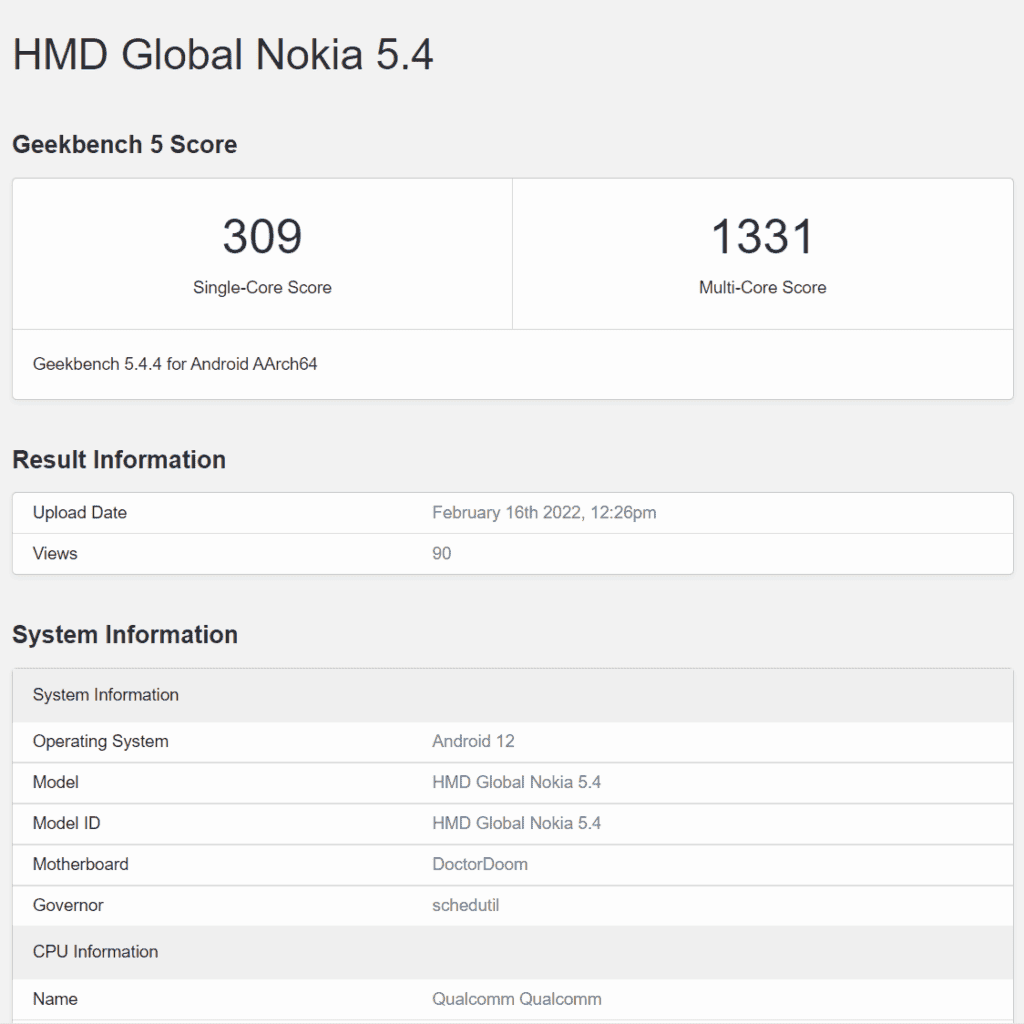 As per the Geekbench benchmark listing, the Nokia 5.4 scores 309 on the single-core test and 1,331 on the multi-core department. That’s the usual score for a Snapdragon 662-powered smartphone in 2022. The Nokia 5.4 was released in December 2020 with mid-range specifications and Android 10. That’s right, Nokia provided an update to Android 11, and now is working on the second major upgrade for the handset.

In terms of specs, the Nokia 5.4 is a simple device with modest specs. It packs a 6.39-inch LCD screen with HD+ resolution. There’s a punch-hole at the top left to house a 16 MP selfie snapper. The device has up to 6 GB of RAM and up to 128 GB of Internal Storage plus the micro SD card slot. In terms of optics, it comes with a 48 MP main camera, an 5 MP ultrawide snapper, a 2 MP macro, and a 2 MP depth sensor. The device has a single loudspeaker and a 3.5 mm headphone jack. The Nokia 5.4 draws its powers from a 4,00 mAh battery but lacks any sort of fast-charging support. Despite this, the device brings NFC for contactless payments. Other features include a side-mounted fingerprint scanner, Bluetooth 4.0, and Wi-Fi 5.

The device got an Android Enterprise recommendation last year. With the latest Android 12 version, non-demanding users will be able to keep this device for another year.

Next Apple Store employees will unionize in the U.S.