POCO established its name in the market after the release of the Pocophone F1 in 2018. The device surprised everyone with a Qualcomm Snapdragon 845 SoC at a mid-range smartphone price. After a massive success and countless units sold, Xiaomi decided to put its sub-brand to rest for an entire year. We saw POCO’s big return in 2020, but the company’s smartphones were mostly made of rebadged devices. We can cite just a few POCO smartphones that are not based on existing Redmi phones such as the POCO X3 series, and the original POCO M3. For this year, apparently, the rebranding policy will still be dominating POCO’s strategy but there will still be some surprises, like the long-rumored POCO Watch.

According to rumors, POCO is gearing up to introduce a bunch of new products in the wearable segment. The POCO Watch is just one of the company’s starting kicks into the category. The new rumored POCO smartwatch has just passed through EEC certification,m which hints at an imminent release. The news comes from the leakster, Piyush Bhasarkar on Twitter. According to him, and to a screenshot, the sub-brand has certified its smartwatch at the Russian Electronics Certification Platform – EEC. 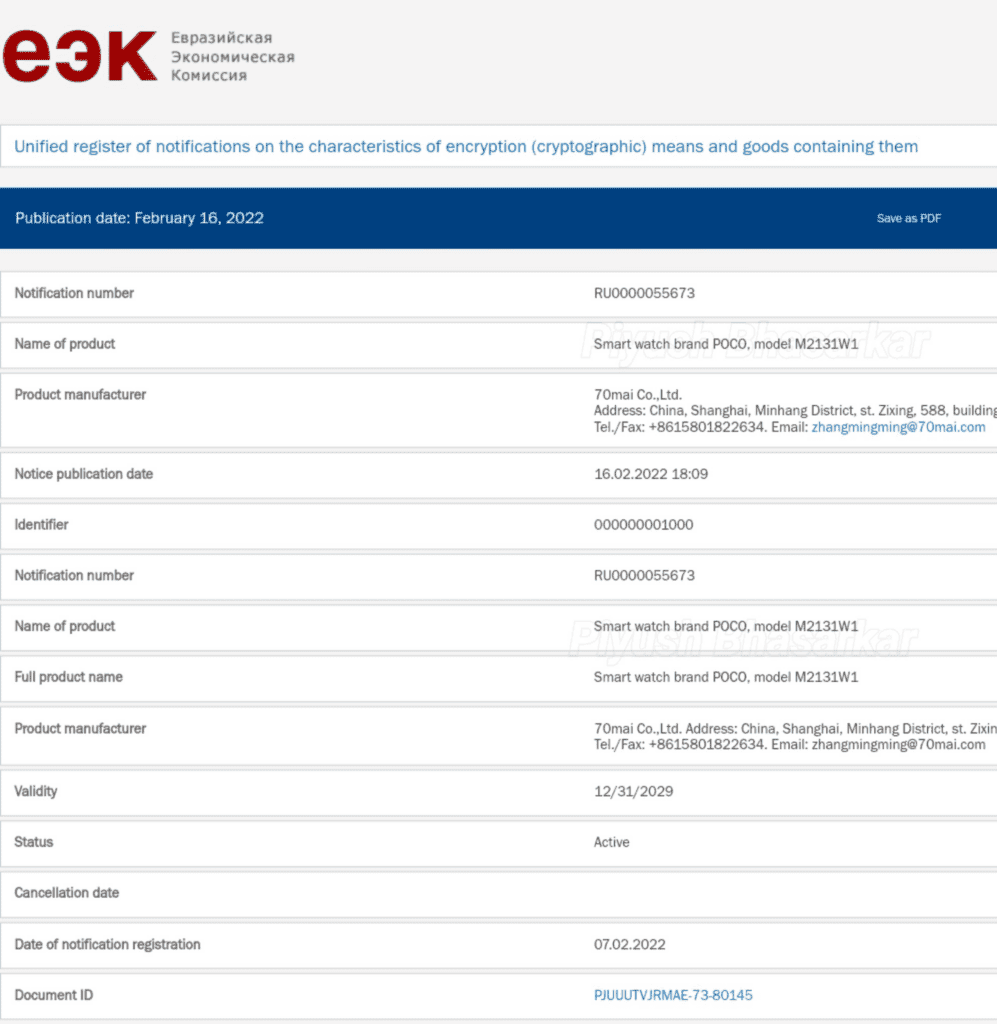 POCO Watch will be manufactured by Xiaomi’s IoT company

Unfortunately, the listing does not share much about the smartwatch’s specifications. However, it clears up some details like the model number – M2131W1. Next, it also reveals the manufacturer of the smartphones – 70mai Co. Ltd. in Shanghai, China. To those unaware, 70mai is one of the brands that Xiaomi has under its Xiaomi IoT ecosystem. The brand is mostly known due to its dashcams. The list of relevant cams includes the 70mai Dash Cam 1S, Dash Cam A400, and Dash Cam Pro Plus.

So we have another possible rebranding, or perhaps 70mai is just manufacturing it for Xiaomi. Unfortunately, there are no details on the device’s specifications. Considering the first leaks, POCO will be launching a mid-range smartphone with an affordable price tag. We don’t expect it to pack many advanced features, but perhaps a heart rate sensor, SpO2 sensor will be included. We expect many software features and sports modes to enhance the experience.

The wearable should open the door for POCO in the range of smartwatches. We could see a launch very soon, and the reveal of the POCO X4 series might be a good opportunity for the company. The second possibility is the launch of the POCO F4 GT series.