Several months ago, during an interview made by GSMArena, Realme VP Madhav Sheth confirmed that Realme’s 125W UltraDART charging technology would arrive through a commercial product. Unfortunately, this didn’t happen yet. The recently released Realme GT 2 Pro charges at the same 65W charging we’ve been seeing for the past years. However, recent reports, that the upcoming Realme GT Neo3 Gaming Edition will finally debut the 125W UltraDART charging technology. Ahead of that, Realme is preparing to introduce the world’s fastest charging technology on February 28, 2022. The company will be at MWC 2022 stage to confirm a bunch of new products including the global Realme GT series. It will also reveal the new charging tech. Ahead of the event, we got a confirmation – It’s a 2ooW charging standard.

When we spotted the first teaser, we started to expect something beyond the 200W rate. After all, Realme is teasing its new technology as the world’s fastest, and Xiaomi already has a 200W charging, which takes the podium at the world’s fastest rate. The company hasn’t divulged how fast the charging tech will be, however, a recently leaked image suggests it will go up to 200W. Apparently, Realme has an unreleased charger with 200W charging support (20V / 10A). It has model code VCK8HACH and supports the Power Delivery protocol, but only until 45W. 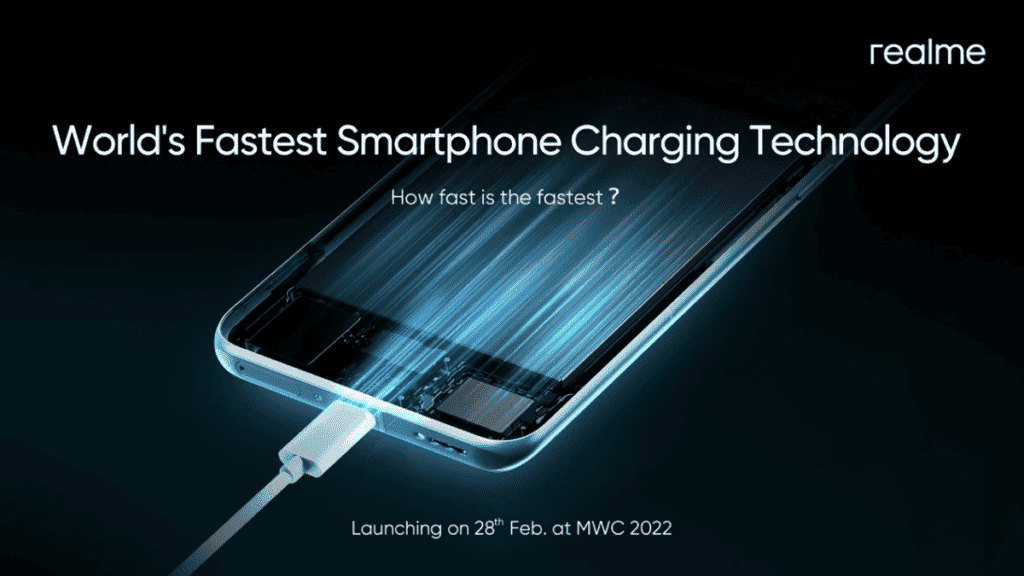 Currently, Realme smartphones are known for supporting only 65W charging. The 200W charge represents a big bump for the company and a major move when not even the 125W charging is widely available. However, it’s a good idea to not hold your breath for it just yet. After all, Realme already has a 125W UltraDART and is gearing to introduce the first device with it. Moreover, the rumors say the company will disclose 80W and 150W charging smartphones in the future. Both of them, are probably based on existing Oppo technologies. We’re not expecting 200W charging to become widely available before these two slower speeds become more popular. In fact, Xiaomi announced its 200W charging, but so far didn’t launch any device with this charging tech.

The 200W charging is a major step, even ahead of Oppo, but this may still be an Oppo-based technology. The BBK Group brands are known for sharing technologies. OnePlus 10 Pro, for example, has 80W charging and it certainly uses the same solution as Oppo’s upcoming Find X5 series. Therefore, the 200W charging may become a future standard for all three smartphone brands.

That said, Realme’s 200W charging is exactly the same as Xiaomi’s 200W charging. So, what can make it faster? Xiaomi demoed the charging filling a 4,000 mAh battery on a customized Mi 11 Pro. The technology took 15 minutes to charge the phone from flat to 100%. Perhaps, Realme’s solution can make this in a few fewer minutes through optimization. Time will tell. Otherwise, the company won’t be unveiling the world’s fastest charging tech, and this is just a marketing maneuver.