After the launch of the Realme V15, Realme is preparing to disclose a new smartphone for the Realme V-series. The device carries the Realme V25 moniker and will bring compelling specifications for the low-end market. Curiously, this handset is touted to reach the global markets as the OnePlus Nord CE 2 Lite. That’s an unprecedented move, but that only shows how OnePlus, Oppo and Realme are closely related. The Realme V24 will reach the market on March 3 in China. The device may reach global markets as OnePlus Nord CE 2 Lite. Let’s see what the leaked details have to say about this smartphone. The announcement date comes right after a teaser made by the company’s CMO.

The Realme V25 was listed on the TENAA website a few weeks back. Thanks to the Chinese certification, we already know what we can expect from the smartphone. First of all, the handset will boast the Qualcomm Snapdragon 695 5G processor. The processor uses a 6 nm architecture and has two ARM Cortex-A78 cores clocked at up to 2.2 GHz. The GPU is the weak point, but can still run games at acceptable rates, to those unaware it uses an Adreno 619 GPU. In terms of memory, the phone comes with 6 GB of RAM, 8 GB of RAM, and 12 GB of RAM. When it comes to storage, the phone has 128 GB or 256 GB of Internal Storage.

The phone flaunts a 6.58-inch Full HD+ LCD screen with a 120 Hz refresh rate. The Realme V25 draws its powers from a 5,000 mAh battery with 33W fast-charging support. In the camera department, the phone has a primary 64 MP main camera with an f/1.79 aperture. There are two 2 MP sensors for depth and macro shots. For selfies, the phone comes with a top-left punch-hole with a 16 MP camera with an f/2.0 aperture. 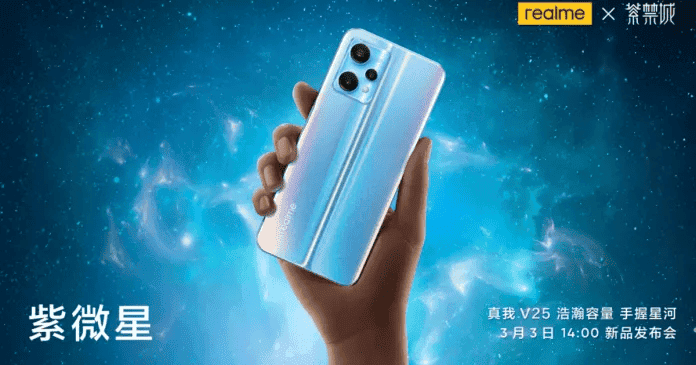 The Realme V25 runs on Android 12 straight out of the box with Realme UI 3.0 running at the top. That’s a nice addition since there are still phones launching with Android 11 in tow. The phone also has a fingerprint scanner embedded in the power button. In terms of dimensions, the phone measures 164.3 x 75.6 x 8.5 mm and weighs 195 grams. Other features include a dual nano-SIM slot, a dedicated micro SD slot, Bluetooth 5.1, and dual-band Wi-Fi.

Realme has just confirmed that its new V-series entry will land on March 3. We don’t know exactly how much time it will take to reach global markets.

Previous Sony PlayStation Plus Games for March 2022 have been revealed

Next HMD forced to pull smartphones from Germany and Switzerland