Analytical agency TrendForce published the results of a study, according to which shipments of displays for laptops last year amounted to a record 282 million units, which corresponds to an annual growth of 25.1%. In the first half of 2022, a significant decrease in indicators is possible.

As TrendForce clarified, in the first half of last year, high demand was due to the effects of the pandemic – the most popular models were consumer laptops and Chromebooks. In the second half of the year, as quarantine restrictions around the world began to be lifted, the demand structure began to transform towards corporate models that predominantly determined sales until the end of the year.

Analysts’ forecasts for the future are not so optimistic: in the first and second quarters of 2022, shipments of displays for laptops will begin to decline. According to the results of the first quarter, their number may reach 67.9 million units, which is 9.7% less QoQ, and in the second quarter the drop will be an additional 9.5% to 61.4 million. This is a standard off-season trend, although it due to two additional factors. First, laptop makers have increased panel inventories: due to shortages in the past two years, manufacturers have ramped up purchases of them to avoid supply chain disruptions. Secondly, due to the global shortage of semiconductors, the supply of laptops has decreased; which has led to an excess of panels in warehouses. 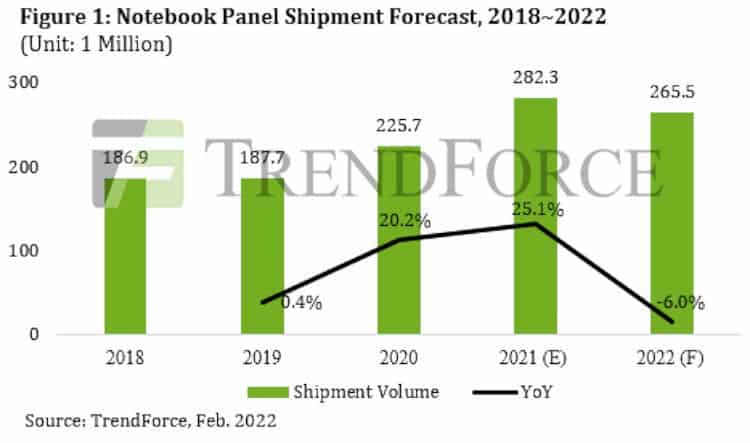 At the same time; TrendForce noted that the profitability of displays for laptops is higher than panels for computer monitors and TVs; so screen manufacturers will continue to strive to increase supplies; in the category that is most profitable for them. This may force them to accumulate additional stocks and start lowering prices. Notebook manufacturers, in turn, can spend the entire first half of 2022 on adjusting stocks of finished products; and in the second, an increase in laptop sales may become a topical issue; so the rate of replenishment of panel stocks will recover. According to TrendForce analysts; by the end of 2022, shipments of displays for laptops will still decrease by 6.0%; and amount to about 265 million units.

Looking forward to 2022, panel shipment performance; and price trends will be adversely affected by adjustments in notebook brand inventories in 1H22. In 2H22, notebook brands will continue to focus on sales plans for whole notebook computers. The sales performance of these brands during the peak season is still worth looking forward to; and the restocking momentum of notebook panels is expected to recover. Current estimates put the shipment of notebook panels at 265 million in 2022, a decrease of 6.0% YoY.