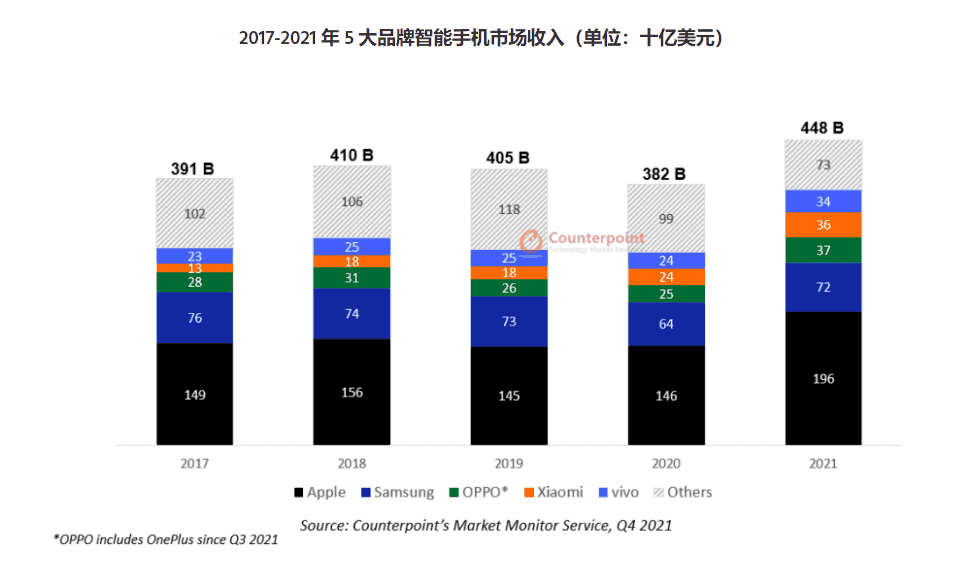 Among them, Apple’s iPhone revenue increased by 35% year on year to $196 billion. The company alone accounts for 44% of the total global smartphone revenue. The strong demand for the Apple iPhone 12/13 series raised the average selling price (ASP) of the iPhone by 14% to $825.

Xiaomi ranks fourth with $36 billion in revenue, mainly due to increased shipments and market share of mid-to-high-end smartphones such as the Mi 11x series. For Vivo, its revenue rose 43% year over year to $34 billion. Its average rose 19% year over year to $259.

Notably, in 2021, the iPhone captures most of the global smartphone market revenue ($196 billion). This is more than Samsung, Oppo, Xiaomi, and Vivo put together ($179 billion).

According to popular Weibo leakster, @DCS many Xiaomi phones have similar designs this year. The rear lens module of the new L19 series that is being polished by Redmi is also a bit like this. The front comes with a center single punch-hole LCD display as well as a side fingerprint sensor. The new Redmi L19 series phone is expected to be the Redmi 10 series mobile phone. This is an entry-level model and it comes with the same similar design.

In 2020, Redmi released the Redmi 9 which uses a 6.53-inch 19.5:9 LCD waterdrop screen with a resolution of 2340 x 1080. The Redmi 9 comes with the MediaTek Helio G80 chip and has upgraded AI full-scene quad cameras. In addition to the ultra-clear main camera, there are also ultra-wide-angle lenses, portrait depth-of-field lenses, and macro lenses. The smartphone also supports dual-band Wi-Fi, a built-in 5020 mAh capacity battery, and supports 18W fast charging. In addition, it is also equipped with the MediaTek HyperEngine game engine optimized for games, which can redistribute CPU, GPU, and memory resources according to the game scene. It can improve fluency under intense game screens and improve battery life.