With Android 12, Google has introduced a new graphical approach to its operating system. The Material You constitutes the greatest visual turning point of the green robot since the introduction of Material Design.

And obviously, all the apps of the large Google suite are also affected by this revolution, including the Phone dialer app, which over the years has gone from being a simple and sparse solution to one of the most advanced available. The Mountain View company had already updated the look to the new dictates of Material You, making it sensitive to the unprecedented chromatic management of dynamic themes, that is, those generated from the background chosen by the user for their device.

But that’s not all, apparently: as reported by some users, Google has in fact begun to test (for now in limited form) a new design for the dialer, or the numeric keypad of the Telephone app. In the comparison between the two images you find below you can appreciate the differences between the current version (on the left) and the new one that is being tested. 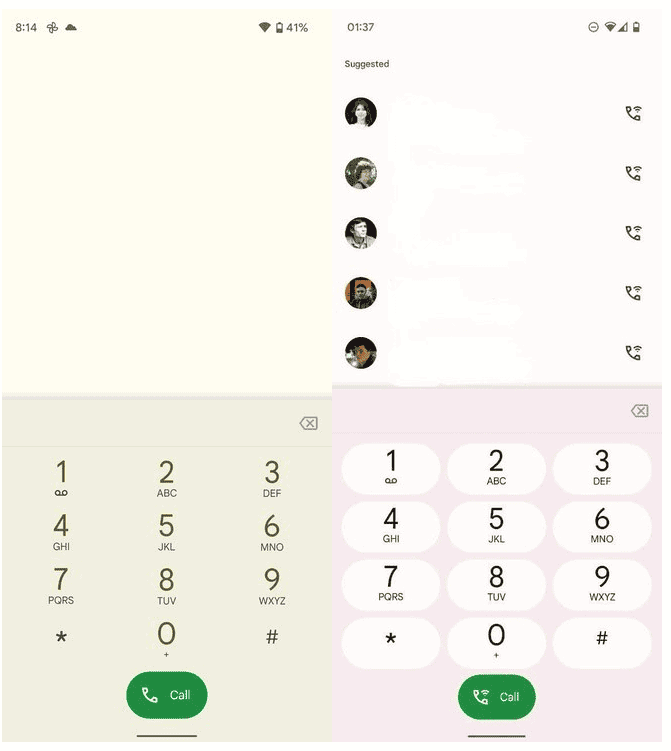 The changes are evident: now the numbers are inside “pills” that recall the physical keypads; and create a chromatic contrasting game with the background. And what changes is also the animation that accompanies the pressing of the keys; with a visual effect that “lights up” the key and expands outwards starting from the point of contact between the finger and the display.

Google has been rolling out the new Material You design for Gmail, calendar, documents, and other Android apps earlier. The new look includes changes to the navigation bar, improved function buttons, and Google Sans font for better readability. It’s part of a larger Android 12 redesign that includes bigger buttons, changed colors, smoother animations; and a number of other changes to built-in apps.

App design changes mean that Android 12 smartphones will now be able to combine colors inside Google’s branded apps; with home screen wallpapers to achieve what Google calls “a more dynamic and personalized look”. However, existing custom color schemes and color-coding of files and folders will remain unchanged.

The end result of Google’s efforts are small but noticeable changes to apps like Gmail, Calendar, and Docs. The company is increasingly leaning towards rounded corners and other aesthetic changes.