The health crisis and the chip crisis have not affected the smartphone market that is in good health, judging by the turnover generated in 2021 by companies in the sector. According to data processed by CounterPoint Research, updated to Q4 2021, the total turnover reached the threshold of 448 billion dollars, with an increase of 7% on an annual basis.

In Q4 2021, the increase in total revenue on a quarterly basis was 20% – a partly predictable result, considering that this period of the year is favorable for purchases, both for the renewal of the offer, and for the inevitable christmas shopping. Results worthy of note even more so if they are compared with those of previous years and it is considered that the two crises mentioned at the beginning have conditioned the possibility of fully satisfying demand.

The average selling price of smartphones in 2021 was $ 322, up 12% from the previous year. The explanation is partly to be traced back to 5G smartphones, which generated over 40% of total turnover in 2021. They are inevitably more expensive than 4G models and have had a greater diffusion: in emerging markets (India, Southeast Asia, Latin American countries and Central Europe) thanks to the main Chinese brands (Xiaomi, Vivo and Oppo) and in those markets mature with Apple and its iPhone 13 range. 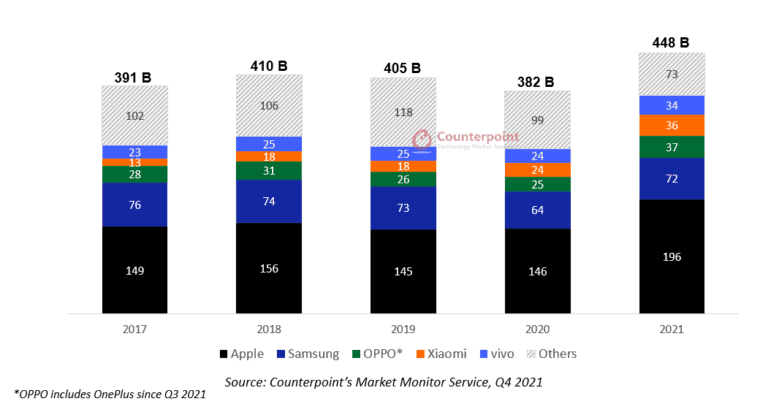 A growing global smartphone market, but concentrated in the hands of a few. Just consider who the aforementioned $ 448 billion was responsible for. Five brands generated $ 375 billion, all the others produced a combined $ 73 billion. The 2021 turnover of the five main companies in the sector is structured as follows (in brackets the variation on an annual basis):

The aforementioned increase in the average selling price of smartphones already provides a basis from which to respond. The thing to think about is that some OEMs have also raised the prices of entry-level and mid-range products. In these cases, the price increase is not, or not only, 5G connectivity; but also the scarcity of components and the costs associated with the sale of the product – think of transport.

Smartphone average selling price (ASP) grew 12% YoY to reach $322, mainly due to a higher share of 5G smartphones; which have a significantly higher ASP than the 4G models; as well as Apple’s successful launch of its iPhone 13 devices. Besides, more 5G-enabled models were released in 2021 as OEMs such as Xiaomi, vivo, OPPO and realme focused on fulfilling a greater demand for affordable 5G smartphones in emerging markets; such as India, Southeast Asia, LATAM and Eastern Europe. As a result, 5G-enabled smartphones contributed more than 40% of the global smartphone shipments in 2021; compared to 18% in 2020.

Previous Apple has patented a computer built into the keyboard

Next Google Phone app gets Material You inspired dialer