Russian troops are advancing through Ukraine and have reached the capital Kyiv. After almost four days of intense combat, and a massive exodus from the civilians, the Ukrainian troops refuse to surrender. Russia will try to control the country’s energy supply, and will certainly cut communications in a near future. In light of this menace, the top apps being downloaded in Ukraine now are Signal, the private messaging app. Another app is Bridgefy, which enables communications without the internet via mesh networks, Maps.me, an offline mapping app, and several “walkie-talkie” apps that enable free communication without sign-ups or personal information.

Ukrainians, are preparing for either the loss of the internet in their country or the closure of free internet behind a new digital iron curtain.

“Apps surging to the top of the charts in Ukraine are Walkie-Talkie apps, VoIP apps, offline navigation apps, VPN apps, Radio comms apps,” Adam Blacker, a VP at app analytics company Apptopia, said today on Twitter. “Many of these apps are enabling offline communication via traditional radio signal or via Bluetooth. These are apps we normally see trending during natural disasters like hurricanes and earthquakes.”

According to Forbes, some places like Odessa have already lost power. Therefore, it’s just a matter of time until all the communication in the country gets compromised. 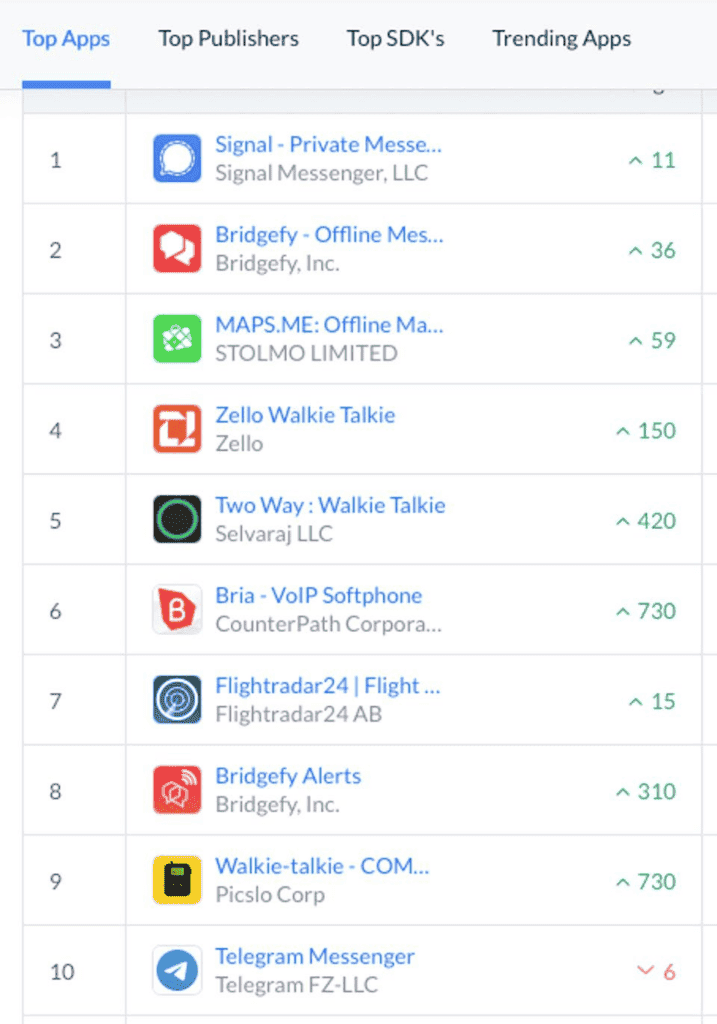 Some of the apps, like Bridegy, use Bluetooth to create a mesh network. It does not depend on a functioning internet. Therefore, it’s not easy to disrupt communication. Hong Kong protesters used it when China took tighter control of the city in 2019.

“The app can connect people via standard Bluetooth across an entire city, thanks to a mesh network. Chatting is speediest with people who are close. However, you can also chat with people who are farther away. Your messages will simply “hop” via other Bridgefy users’ phones until they find your intended target. While you can chat privately with contacts, you can also broadcast to anyone within range, even if they are not a contact.”

Also, some of the apps are ones to track airplanes, perhaps an unlikely to succeed attempt to see where the Russian air force is attacking. For now, apps getting fewer and fewer downloads in Ukraine are games, social networking apps such as Facebook, TikTok, and Zoom. It’s pretty much understandable, as users are facing violence and destruction. Everyone has different priorities right now.

The United States and Europe have applied multiple sanctions against Russia in a bid to force the country to retrieve. Some of these sanctions can eventually put the people against the local government. In fact, many Russians have protested against the Ukraine invasion, and the government answered by arresting the protesters.

Giants like Twitter have already applied their own round of sanctions against Russia in support of Ukraine. The international hacker group, Anonymous also declared war against Russia offering support to Ukraine.

Next Lenovo Legion Y700, and Legion laptops coming along with the Y90