Two days ago, Apple officially announced that the Spring 2022 Apple product launch conference will be broadcast live online at Apple Park on March 9. At this event, the Cupertino-based company will unleash a variety of new products, including the iPhone SE3, iPad Air 5, and MacBook Pro powered by the M2 self-developed chips.

Among them, the new generation of cheap iPhone SE3 is going to be in the spotlight. Though it is not a premium smartphone, many Apple fans have been waiting for it for ages. Interestingly, this phone will sport the same Apple A15 processor as the iPhone 13 series.

Today, we got a few renders of the upcoming iPhone SE3 based on rumors. From the renders, we can see that the iPhone SE3 will completely continue the design of the previous generation. Thus, the handset will sport a 4.7-inch small screen on the front. It is almost identical to the iPhone 8. Interestingly, there is still a round Home button below the screen. 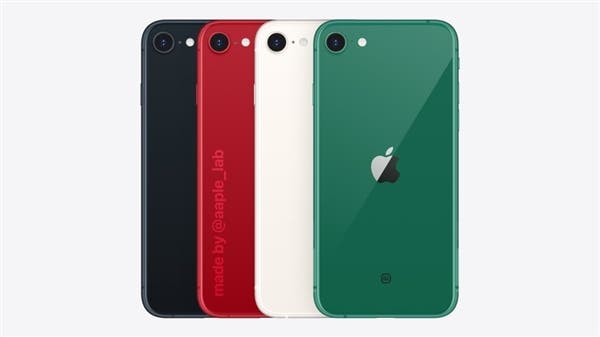 When we say it looks like the iPhone 8, it refers to the back design as well. There is a single camera and a logo slightly moved down and placed in the center.

In terms of color, the iPhone SE3 has four options – black, white, red, and green, of which green is a color that Apple has not used before.

Lastly, as for the price, according to supply chain sources, the global price of the iPhone SE3 this year should be consistent with the previous one, starting at $399. This is the cheapest iPhone in history. So it’s logical why many are waiting for it so eagerly. But on the other hand, the iPhone 13 Pro series is the most popular one among all models.

As said, apart from the iPhone SE3, the company will also uncover the new iPad Air. The latter ought to come with an A15 Bionic SoC and support 5G networks. As for photography, this tablet will sport a 12MP ultra-wide-angle front camera. However, it hasn’t got many changes in terms of appearance. We mean basically, it looks like the iPad Air 2020. But this shouldn’t surprise you, as Apple is not known for frequent design changes. Anyway, on the front, the tablet will carry a 10.9-inch display with a narrow bezel and its touch ID will be integrated on the power button. On the bottom, the new iPad will host a USB-C interface and will be available in space gray, silver, and green.