In two days, the most anticipated conference is of course Apple’s previously announced 2022 spring new product conference. At the conference to be held at 2 am on March 9th, Apple may launch a new iPhone as well as other new products. A series of new products including the iPhone SE 3 and new Mac computers may hit the road. From these devices, the iPhone SE 3 has attracted much attention. This latest small-screen iPhone is also a highlight of the conference. Recently, this new small-screen iPhone has also attracted the attention of well-known Apple analyst Ming-Chi Kuo. According to Ming-Chi Kuo, the iPhone SE 3 will most likely be available in three different storage options. 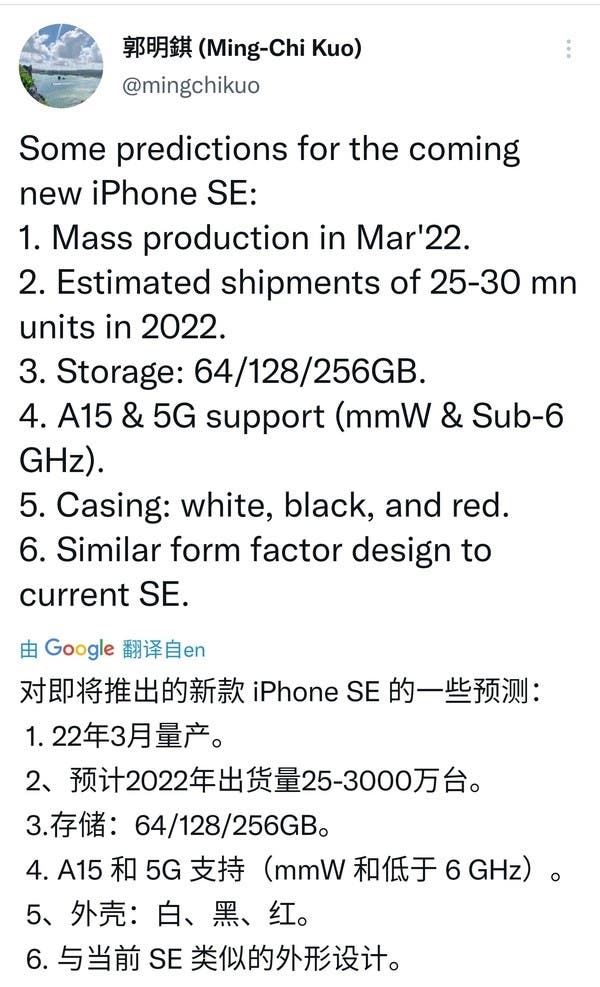 Ming-Chi Kuo claims that the new iPhone SE 3 should be available in 64GB, 128GB, and 256GB. If the 256GB version arrives, it will be the first iPhone SE model to have a 256GB version. In view of the high accuracy of Ming-Chi Kuo’s previous reports of Apple products, this statement is also very possible.

Apple’s current iPhone SE 2 was launched in April 2020, nearly two years ago. The internal memory of the iPhone SE 2 has only two options, 64GB and 128GB. If the new iPhone SE 3 really supports the 256GB version, it also means that its mobile phone storage capacity will be double.

Apple’s launch of the 256GB version of the new iPhone SE 3 can meet the needs of consumers on the one hand. It will also bring higher profits to Apple on the other hand. Apple can be said to be killing two birds with a single stone.

However, the above statement is only a guess by Ming-Chi Kuo and has not been officially confirmed by Apple. Whether Apple will eventually launch a large-capacity version of the iPhone SE 3 will not be known until the day of the launch.

The iPhone SE 3 is a very predictable device. This smartphone will come with the A15 Bionic SoC and will not have any changes to its design. Apple will also introduce 5G to align with the current development trend of mobile phones. In the camera department, it could add a movie mode and that’s about it. If you want to get this device, please pay special attention to the battery! The battery capacity could be abysmal.

Next Galaxy A53: Samsung's new smartphone has been revealed