According to statistics from CINNO Research, the sales of smartphones in the Chinese market in January were about 30.87 million units. This is an increase of 0.4% year-on-year and a month-on-month increase of 38.6%. CINNO said that although Apple’s smartphone sales in January fell slightly by 1.8% month-on-month, it still grew by 11.4% year-on-year. Among them, the iPhone 13 has been the champion of single-unit sales in the Chinese market for the fourth consecutive month. In total, the iPhone 13 sales are over 2.3 million units. 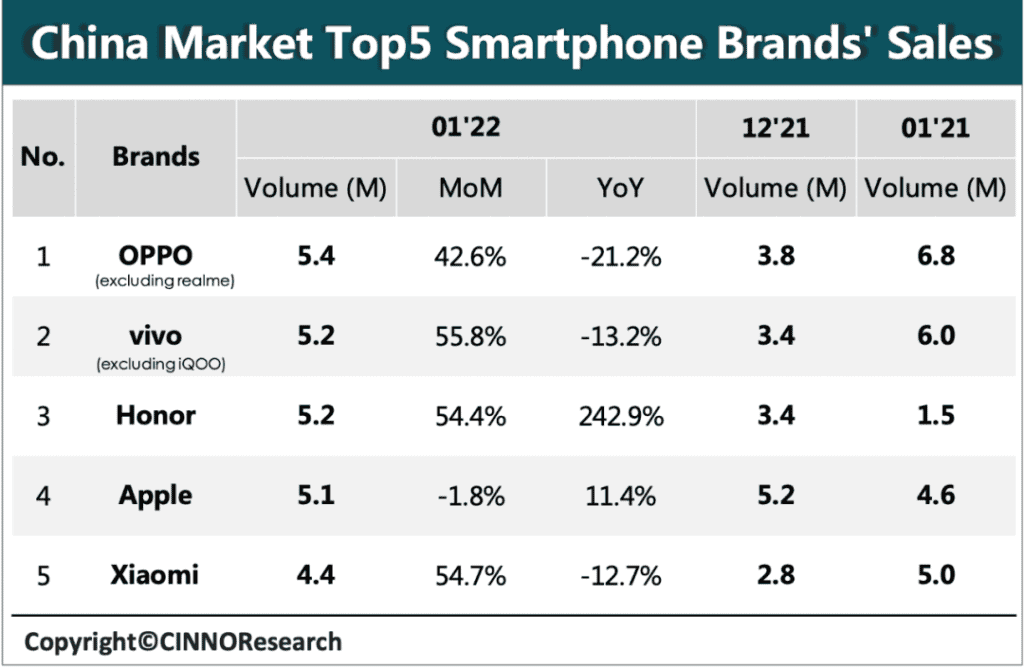 In addition, Oppo and Vivo firmly rank first and second in Chinese smartphone sales. These brands have a month-on-month increase of 42.6% and 55.8%, respectively. Furthermore, the Chinese brands record a year-on-year decrease of 21.1% and 13.2% respectively. The data shows that Oppo Reno 7 and Oppo A56 are now Oppo’s main sales models. As for Vivo, its main sales force is coming from the Vivo S12.

The report pointed out that in January 2022, Honor smartphones continued to perform strongly. The company ranks third in the Chinese market with its sales volume slightly lower than that of Vivo. Honor also records a year-on-year increase of 242.9% and a month-on-month increase of 54.4%. Among them, Honor 60, Honor X30, Honor Play 30 Plus, and Honor Play 20 became the top 10 best-selling models in January.

Considering the sales lapse in 2020, there is a year-on-year increase for the top five brands. Xiaomi’s smartphone sales rank fifth in January, with sales down 12.7% year-on-year and up 54.7% month-on-month.

A recent report from Strategy Analytics reveals that in Q4 2021, the average selling price (ASP) and wholesale revenue (WSR) of the global smartphone industry will increase by 9% and 6% year on year, respectively. In addition, the WSR and ASP of smartphones in 2021 will also increase by 15% and 10% year-on-year, respectively. As for specifics, that is referring to brands, Apple remains at the top of the global smartphone market. It maintains its lead with a higher revenue share from last year. However, we have Samsung which is close behind with Xiaomi, Oppo, and Vivo also chasing.

Realme has been deposed by Honor and the latter is now in the sixth position. The former will now have to make do with the seventh position while Lenovo-Motorola, Huawei, and Transsion sit at eighth, ninth, and tenth positions. Considering the price of iPhones, Apple has the highest share of mobile phones above $1,000. Looking at the shipments, Apple Q4 ranks first with a 22% share. There is also Samsung, Xiaomi, Oppo, and Vivo chasing fast.

Previous Qualcomm Snapdragon 8 Gen 2 exposed: to use a new foundry