The Realme C35 smartphone will be going on sale in India starting from today, March 12 as the latest budget smartphone offering from Realme. To recall, the Realme C35 went official last month with sufficiently good specifications. Moreover, the phone carries a reasonable price tag of INR 12,000. As a past leak predicted, the phone launched with three cameras at the back and a 5000mAh battery for drawing its juices.

Furthermore, the phone comes in a polycarbonate body and the sides feature a flat frame. You can choose between two highly appealing color options as well. A dedicated microsite for the new C-series smartphone has gone live on the Realme India website. The microsite confirms that the Realme C35 will go on sale in India at 12 PM (noon) on March 12. Moreover, it reveals the Realme C35 price in India and other key details.

Alternatively, you can purchase the Realme C35 from Flipkart. You can also get your hands on the newly launched Realme phone via a slew of other mainline channels. Now, let’s check out the Realme C35 specs, price in India, sales offers, and other details. The Realme C35 comes in two storage configurations. The 4GB RAM+64GB storage model will set you back INR 11,999. However, if you purchase the slightly larger 4GB RAM+128GB storage variant, you’d need to shell out INR 12,999.

Furthermore, you can choose between Glowing Black and Glowing Green color options. Also, you can avail of a 10 percent discount with your SBI Credit Card as part of the first sale offer. Likewise, consumers can opt-in for EMI transactions. However, those who place their orders via the Realme website will be eligible for receiving INR 350 discount if they pay via MobiKwik. Also, they can get up to INR 1,000 cash back if they pay using Paytm.

Now, the Realme C35 is an affordable smartphone, but it boasts sufficiently good specs. For instance, it sports a large 6.6-inch IPS LCD with Full HD+ resolution, and a 180Hz touch sampling rate. Aside from that, the screen provides a peak brightness of 600 nits and a screen-to-body ratio of 90.8 percent due to the thin bezels. However, the bezel at the chin is relatively thick. The display has a waterdrop notch at the top center. 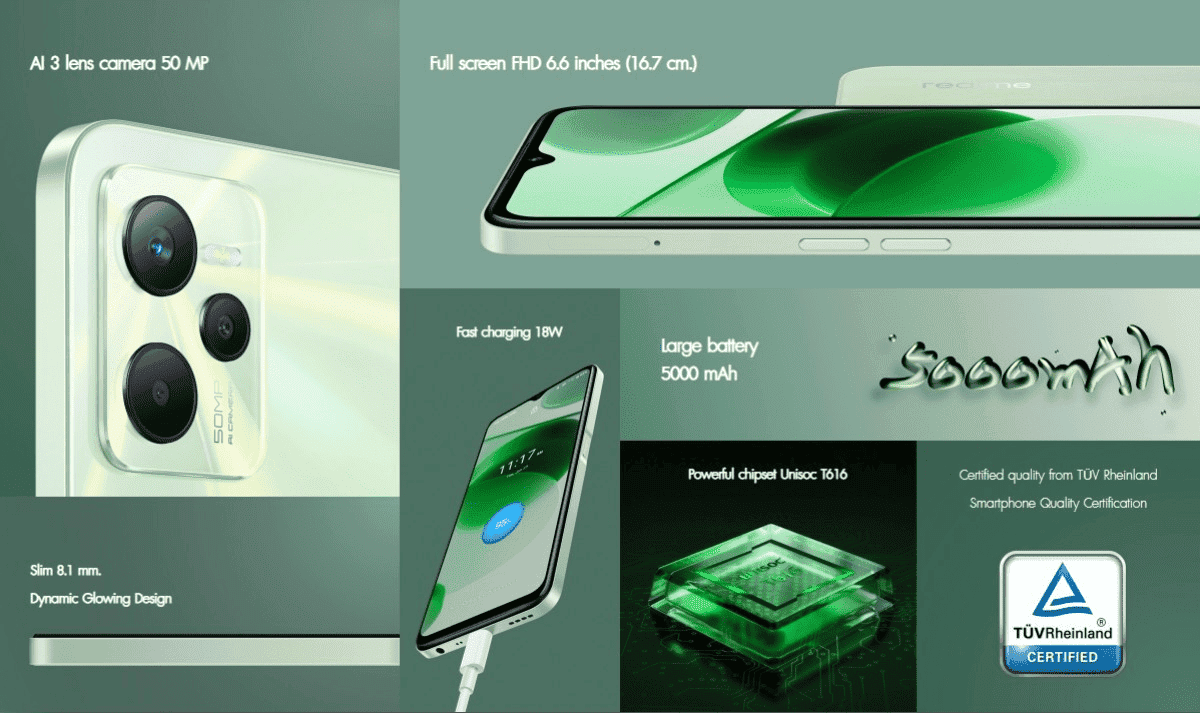 Moreover, the phone packs a Unisoc T616 SoC under the hood. The peak clock speed of this processor is 2GHz. The phone ships with 4GB of RAM and offers up to 128GB of onboard storage. However, you can expand this built-in storage capacity up to 1TB with the help of a microSD card. For optics, the C35 comes with three cameras at the back. This includes a 50MP main camera, a 2MP macro camera, and a black and white sensor.

Upfront, the phone houses an 8MP shooter for selfies and video calling. A 5000mAh battery unit with 18W fast charging powers up the entire system. Lastly, the phone runs Android 11 OS with Realme UI 2.0 on top.