The iQOO Z6 5G smartphone’s renders have popped up on the internet, showcasing the phone’s awe-inspiring design. The iQOO Z6 5G will launch in India on March 16, and it will be available exclusively via Amazon. To recall, earlier iQOO phones were also sold in the country through Amazon. Now, a dedicated microsite for the upcoming 5G-ready phone has gone live. This microsite confirms the iQOO Z6 5G launch date in India and sheds some light on its key specs.

As if that weren’t enough, noted leaker Ishan Agarwal has shared some official-looking iQOO Z6 5G renders in collaboration with 91mobiles. To recall, the Chinese smartphone brand teased iQOO Z6 5G after the iQOO Neo 6 specs were leaked. Since it is no secret that the Z6 5G is headed to the Indian market, the leaked renders are probably giving us our first look at the actual handset before launch. On the downside, they only showcase the rear panel of the upcoming phone. 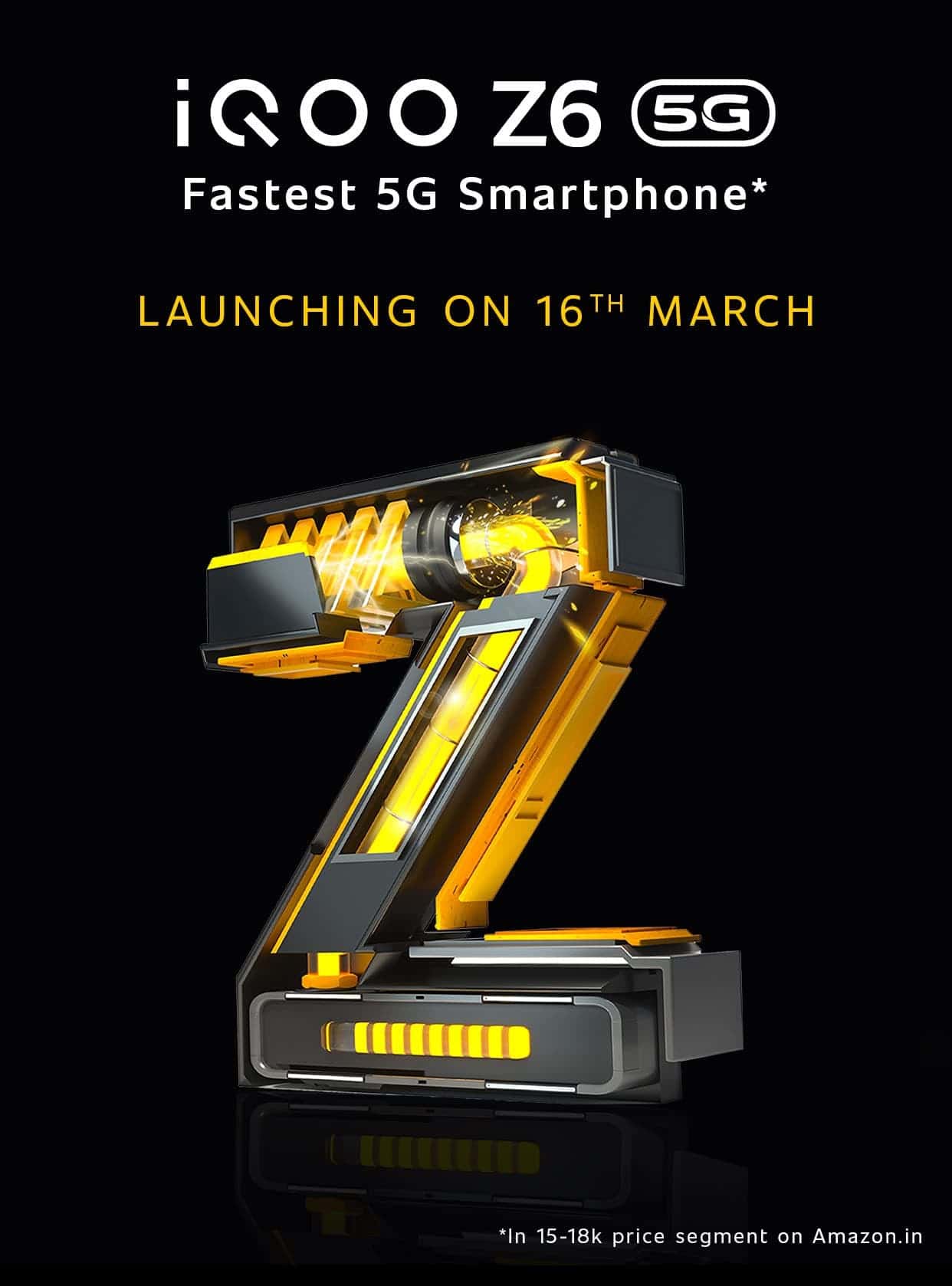 Nevertheless, the iQOO Z6 5G renders showcases the rear design in full glory. The microsite reveals only some key specs of the handset. However, 91mobiles managed to acquire the rest of the iQOO Z6 5G specifications. There are no prizes for guessing that the much-awaited iQOO Z5 successor boasts an impressive array of notable upgrades. For optics, the rear panel houses a rectangular camera setup. This rear camera module has three sensors along with an LED flash.

Furthermore, the design includes an “AI Camera” and “5G” text next to the rear camera module. The flat edges of the upcoming phone seem to draw inspiration from the iPhone 13. Moreover, the right side houses the power button which doubles up as the fingerprint sensor. Also, the leaked renders confirm that the Z6 will be available in Blue and Black color options. It is likely to come in a polycarbonate back with an aluminum frame. Now, let’s check out the specs listed on the Amazon microsite.

First off, the microsite confirms that the Z6 5G will sport a 6.58-inch display. Furthermore, it reveals that the screen will support a 120Hz refresh rate and offer a screen-to-body ratio of 90.61 percent. Aside from that, the display will deliver an FHD+ resolution and a DCI-P3 color gamut. Under the hood, it packs the Snapdragon 695, which will facilitate the 5G network connectivity. Furthermore, the phone will ship with LPDDR4x RAM.

Also, it will come with a five-layer 1445mm-square vapor chamber system to bring the surface temperature down to about 3-degree centigrade. Likewise, it can reduce the surface temperature to about 10-degree centigrade, while playing games. According to Ishan, the phone will feature a 50MP main camera with Eye AF. It will also have RAM 2.0 with a 240Hz touch sampling rate and up to 4GB virtual RAM.

Moreover, the phone packs a 5000mAh battery. It also supports Ultra Game mode for a superior gaming experience. The phone measures 8.25mm and weighs 186 grams. According to an earlier report, the iQOO Z6 is likely to retail for around INR 15,000 in India.