Tomorrow will be the presentation of Realme GT Neo 3, which has high hopes. The smartphone may well become the most balanced device in its price segment. In the time remaining before the announcement, the company continues to reveal the details of the realme GT Neo 3.

So, now Realme posted teasers announcing that the new product will receive a case with a thickness of 8.22 mm and it will weigh 188 grams. Front and rear body is covered by glass. The display is flat and offers fairly thin bezels around the perimeter, where the thickness of the side was 1.48 mm, and the bottom 2.37 mm. The Dimensity 8100 chipset will be installed inside, and to save it from overheating problems, a 4129mm² liquid cooling system is offered inside. More about Realme GT Neo 3 a day before the announcement

We are especially proud of the Realme GT Neo 3 cameras. It is stated that the Sony IMX766 module with a resolution of 50 megapixels will be offered as the main sensor on the back side, which will be awarded electronic and optical image stabilization systems. The camera will receive a new algorithm for fast focusing, which is 94% faster than other solutions on the market. And it also promises a 62% faster image processing and there are improvements in terms of night shooting.

The Sony IMX766 is also equipped with all-pixel omnidirectional focusing technology, which uses the sensor’s 2×2 pixel structure to achieve horizontal and vertical focusing in both directions, and the two-way combination makes focusing faster and more accurate. 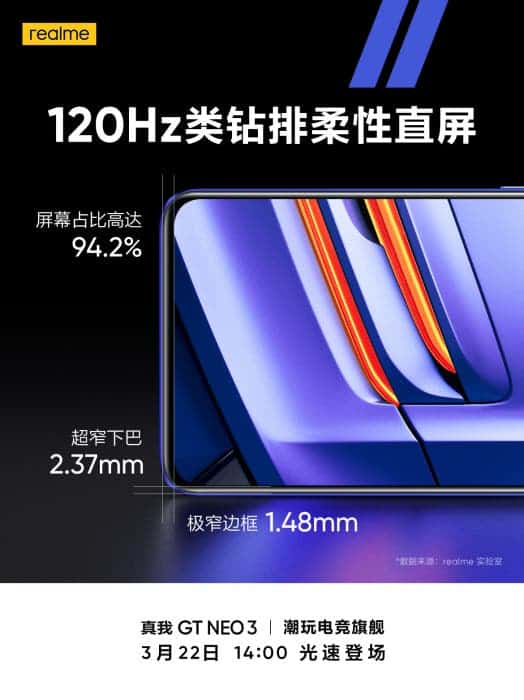 Realme has become the fastest growing 5G smartphone brand in the world for the first time. The steady growth has positioned Realme as the 5th largest 5G smartphone shipment in 20 global markets; and strengthened its position as an industry leader in the promotion of 5G technology.

According to the latest report from Counterpoint Research; Realme’s 5G phone shipments posted the largest growth of any major smartphone brand; with a 165% year-on-year growth rate in the fourth quarter of 2021. The company has had particular success in countries such as Italy, Spain, France, the United Kingdom and Switzerland; in each of which Realme is the fastest growing brand thanks to the 8 5G and GT series.

Realme’s 5G smartphones also continue to perform well in regions such as the Middle East, North Africa, and Asia Pacific; which make up the majority of the 20 markets (including India, Bangladesh, Malaysia, Morocco, Myanmar, and Singapore); where 5G shipments Smartphones from Realme are in the top five.

Next Samsung Galaxy S22 FE will be more powerful than the Galaxy S22!