Oppo has been taking the spotlight due to the recent release of the Oppo Find X5 series. The company is preparing the devices for the global markets, and meanwhile is updating the range of budgets smartphones with new contenders. Just recently, the company introduced the Oppo A96 4G to join the existing 5G variant as a more cost-effective version. Now, Oppo is introducing a super-budget smartphone, also in the A-series – The Oppo A16e. The new handset isn’t really impressive for those who have been following tech advancements. For instance, the device packs an old Helio chipset with outdated Android. Anyway, let’s see what this device has in tow.

The Oppo A16e packs a 6.52-inch LCD screen with HD+ resolution of 1,600 x 720 pixels. Unfortunately, the budget phone only offers a 60 Hz refresh rate. After all, the chipset inside can’t withstand more than that. The panel has a waterdrop notch cutout and up to 480 nits of brightness. One interesting bit is the presence of a Corning Gorilla Glass 3 protection against scratches. Although this is a budget device, the 89% screen-to-body ratio is quite nice. However, the fairly thick bottom chin is present here.

The waterdrop notch packs a 5 MP selfie snapper with an f/2.4 aperture. Interestingly, this is one of the few devices in the market that ships with just one camera. This clearly says that the Oppo A16e is intended for the super-budget segment, where devices like the Galaxy A0 and Core series sit. It packs a single 13 MP camera with an f/2.2 lens and an LED flash. 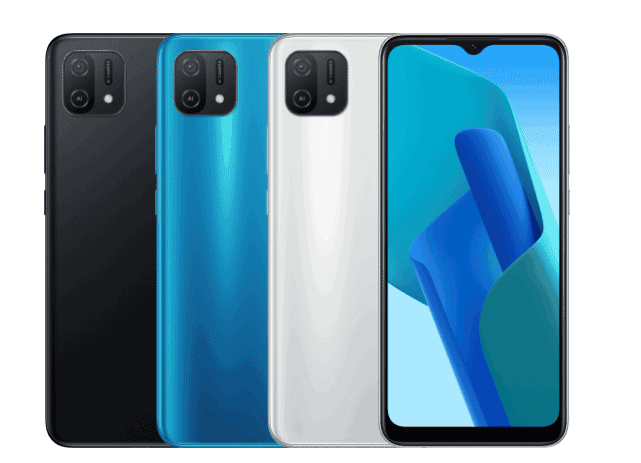 The Oppo A16e comes with a fairly-large 4,230 mAh battery, but we don’t expect an exceptional battery life given to the old processor. Also, charging it won’t be a quick task as it uses the old micro USB port. The phone also ships with Color OS 11.1 which runs on top of Android 11. Given the specifications, we don’t think this phone will ever get an update to Android 12.

Anyway, it’s a package for users that just want a usable smartphone for non-demanding applications. You may consider using some Go or Lite applications for better usage.

The phone comes in Black, Blue, and White colorways. However, the price and availability are yet to be disclosed. Worth noting that Oppo is also preparing for the launch of a new Oppo K10 smartphone in India.