The upcoming Samsung Galaxy M53 5G smartphone’s key specifications have surfaced online once again with additional details. The upcoming 5G-ready smartphone from Samsung has been subject to a lot of leaks lately. Moreover, the handset has been floating around the rumor mill for quite some time now. Last week, the Samsung Galaxy M53 5G specifications were leaked, courtesy of the YouTube channel The Pixel.

The smartwatch will reportedly pack a MediaTek Dimensity 900 5G processor under the hood. Aside from that, the handset is likely to sport a display that offers a 120Hz refresh rate. For optics, the phone could house four cameras, including a 108MP main camera on the back panel. To recall, the upcoming smartwatch was originally expected to launch as a rebranded version of the Galaxy A53 in some regions.

According to Yogesh, the smartphone will come with more than ten 5G bands. On the downside, he suggests that Samsung will not ship a charger with the Galaxy M53 5G. Furthermore, the smartphone could boot Android 12 OS with a layer of OneUI 4.1 on top. The latest tip also suggests that the phone will sport a 6.7-inch Super AMOLED display. Moreover, this screen will offer a 120Hz refresh rate. Also, the phone will probably have a plastic finish, as per a report by Gadgets 360.

Under the hood, the phone packs a MediaTek Dimensity 900 5G processor. Notably, the Galaxy M53 5G was listed on the Geekbench database with the Dimensity 900 SoC earlier this month. Aside from that, the phone could ship with 8GB of RAM and offer up to 256GB of onboard storage capacity. The phone could be available in 8GB RAM+128GB storage, and 8GB RAM+256GB storage configurations. 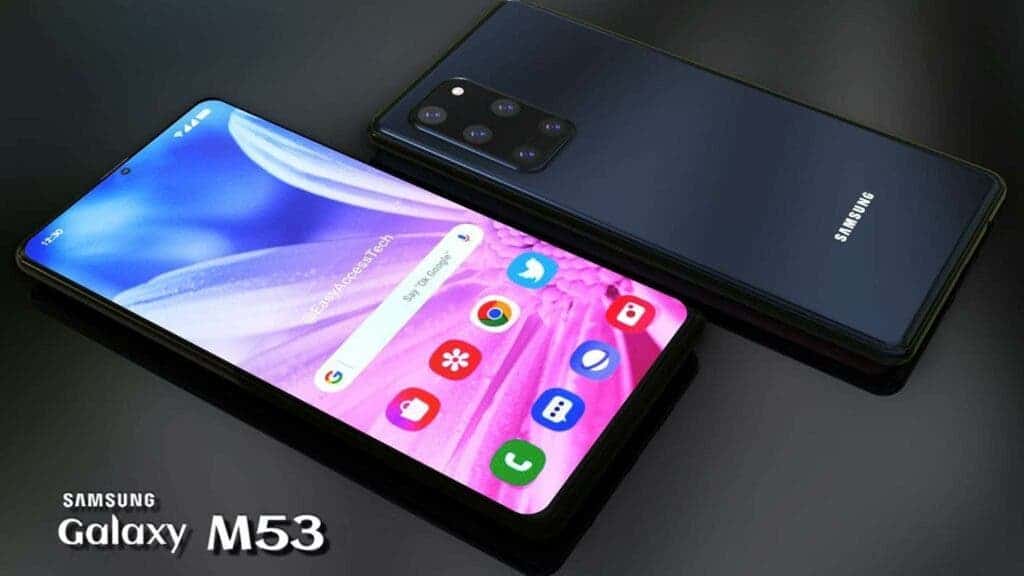 In the photography department, the handset will feature four rear-mounted cameras and an LED flash. Moreover, this rear quad camera setup will include a 108MP main camera, an 8MP wide-angle camera, a 2MP macro camera, and a 2MP depth sensor. Upfront, the phone houses a 2MP shooter for capturing selfies and video calling. In addition to this, the Galaxy M53 5G will use a robust 5,000mAh battery that supports 25W fast charging.

The video shared on The Pixel YouTube channel earlier this month shows the design of the upcoming Samsung phone. Aside from that, the publication claims that the Galaxy M53 5G could retail between VND 10.5 million to 11 million for the base 8GB RAM+128GB storage model in Vietnam. Lastly, the phone will be available in the country through offline retailers.