Xiaomi has been constantly expanding its range of products. In the last year, we saw the company making a comeback to the segment of tablets with the Xiaomi Pad series. Now, it seems that the company is targeting the compact laptop range. There are rumors suggesting that Xiaomi will unleash a compact Notebook with Xiaomi Book S 12.4 moniker. It seems to be a competitor for the MacBook series with its 13-inch models. The device seems to be really coming as it has just acquired Bluetooth SIG certification. In addition to the important approval, the device also has been spotted at the Geekbench benchmark database.

Xiaomi Book S – a compact laptop with an ARM-based processor

Bluetooth SIG isn’t very revealing when it comes to specification. Thankfully, Geekbench is. The benchmarking platform serves to reveal some of the key details of this upcoming compact laptop. As per the platform, the Xiaomi Book S 12.4 will pack a Qualcomm Snapdragon 8Cx Gen 2 SoC with a clock speed of 3.0 GHz. The laptop comes with 8 GB of RAM and is running Windows 11 Home 64-bit OS. We don’t know about storage, but we can expect 256 GB, or in the best scenario 512 GB of Internal Storage. The device really seems to be Xiaomi’s take into the world of ARM-based computers, and it’s partnering with Qualcomm and its Snapdragon 8cx series. 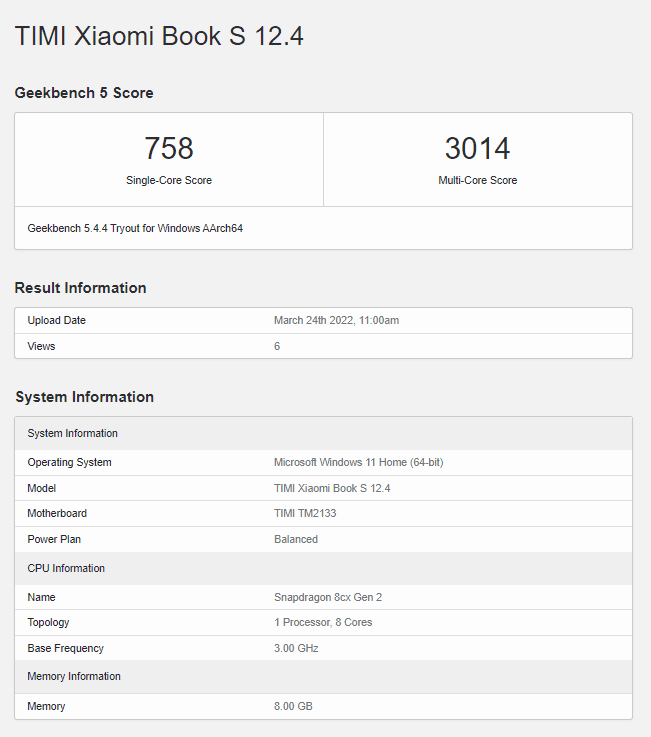 As aforementioned, Bluetooth SIG only serves that the model has Bluetooth V.1 support. So, you can use it with Bluetooth accessories without any hassle. Unfortunately, that’s everything we know about the Xiaomi Book S 12.4 at the moment. We also expect the device to boast a premium aluminum finish with a very lightweight body. Since it’s compact Xiaomi may limit the number of ports, and we expect 65W charging or something beyond. The display may be an OLED one, but we won’t hold our breath for it.

The Xiaomi Book S is already passing through the certifications. So its release shouldn’t be much far. We expect the leaks to intensify in the upcoming days. Xiaomi hasn’t said anything about this product for now. But we expect this to change soon. There is no timeline for the launch, but that may happen sometime in Q2 or Q3 2022. The company will also update its Pad series in the future. So, the better thing we can do for now is to stay tuned.