According to reports, the iQOO Neo 6 will be revealed in the upcoming weeks. In fact, Vivo (iQOO parent company) is gearing up to introduce a bunch of new smartphones in April, most precisely on the 11th. The list of devices includes the Vivo X Fold, Vivo X Note, and the Vivo Pad. A few days later, the company will introduce the iQOO Neo 6. All these products will go official in the upcoming days in China. Ahead of the release, the device had been spotted on the Geekbench benchmark. According to the listing, it will be a cost-effective flagship with no less than the Qualcomm Snapdragon 8 Gen 1. 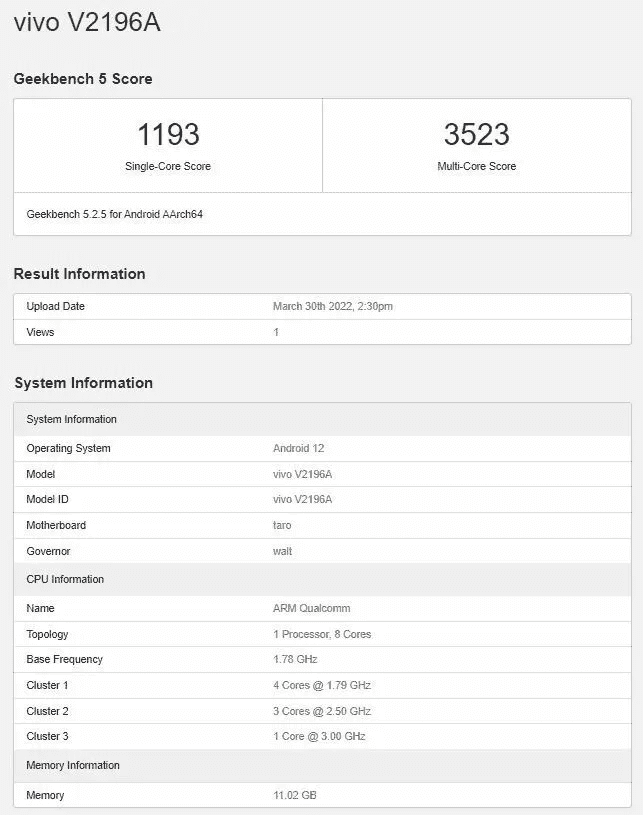 The iQOO Neo 6 appeared in the popular benchmarking platform with the “Taro” codename. This is the codename for the Qualcomm Snapdragon 8 Gen 1 chipset. The device was also benchmarked with 12 GB of RAM, and Android 12 straight out of the box. The device will come with OriginOS Ocean straight out of the box in China. However, in India and global markets, it will be unleashed with Funtouch OS 12. Curiously, there are rumors suggesting an Indian variant with the Snapdragon 778G or the Snapdragon 778G+. That would be a significant difference if true. The device also had its design colorways confirmed before.

The iQOO Neo 6 was already spotted on the TENAA certification, giving us a few more details about the specifications. The phone packs a 6.62-inch AMOLED screen with Full HD+ resolution. The device also draws its powers from a 4,700 mAh battery, and we expect it to be paired with 80 W fast-charging. The device that bears model number V2196A on certifications has been spotted with 20 V / 4A speeds at the 3C certification listing.

Around 9 iQOO and vivo devices are coming

In addition to the iQOO Neo 6, the leakster Panda is Bald is also teasing a bunch of other Vivo / iQOO smartphones for the next few months. Around 9 models have already “entered the network”. The list comes with the Vivo X Note, Vivo Pad, Vivo X Fold, Vivo X80. The company will also reveal the Vivo X80 Pro and a new smartphone with Snapdragon 888 SoC. Moreover, there will be the rumored Vivo S15e, a new smartphone with a 6,000 mAh battery, and the iQOO Neo 6.

We don’t know if all these products will land in April. But apparently, Vivo and iQOO enthusiasts will have a hectic month in April. We just don’t know how long these devices will take to hit global markets.