Vivo is gearing up for one of its biggest events of the year in China. The company will be revealing its very first foldable smartphone in the form of the Vivo X Fold, and a new smartphone replacement for the NEX series dubbed Vivo X Note. The company will also introduce its very first take into the tablet segment with the Vivo Pad. In addition to that, the company is also preparing the launch of the Vivo X80, Vivo X80 Pro, and Vivo X80 Pro+. There are also other smaller devices like the Vivo S15e and others. Finally, the company will also introduce a new device under its iQOO brand, the iQOO Neo 6.

The company will be introducing its new smartphones and tablets in China on April 11. Two days later, on April 13, the company will be disclosing the iQOO Neo 6. The device will also hit the Chinese market, and there is still no confirmation on a global release. However, there are rumors about an Indian version with intermediary specs. Previously, we have been expecting the iQOO Neo 6 to be a mid-range smartphone, but a recent leak suggests it has flagship performance. 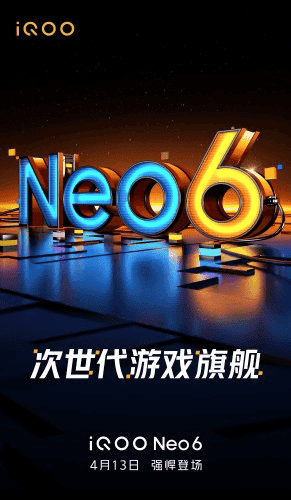 The iQOO Neo 6 has been spotted at the Geekbench benchmark. While the company didn’t tease its specifications, the popular benchmark platform leaves almost nothing to the imagination. Under the hood, the phone will bring the Qualcomm Snapdragon 8 Gen 1 SoC. That’s the flagship SoC available in so many flagships, and as per the rumors, the iQOO Neo 6 won’t be positioned among flagships when it comes to the price. In addition to the 4 nm chipset, the phone will also pack 12 GB of RAM, which is another appealing spec for 2022 standards.

In addition to the powerful flagship SoC, the phone will also flaunt a 6.62-inch AMOLED screen with a centered punch-hole. As per the rumors, the display comes with a Full HD+ resolution of around 2,400 x 1,080 pixels. Moreover, it will refresh at 120 Hz and we expect a high touch-sampling rate. After all, iQOO still is a gaming-focused brand. In addition to that, leaked specs also confirm a 4,700 mAh battery with 80 W fast-charging. This is another feature borrowed from other BBK Electronics brands. Last but not least, the iQOO Neo 6 will run Android straight out of the box. It’s always good to hear that when smartphones are still coming with Android 11. We expect OriginOS Ocean to be running at the top in China. However, global variants will reach the market with Funtouch OS 12.

Next Realme C31 launched in India with 6.5-inch LCD and Unisoc chipset