It seems that after the rather successful launch of Windows 11 last fall and stable growth in the first few months in March, the speed of distribution of the operating system has decreased as much as possible. This is evidenced by the research data of the AdDuplex platform, which monitors the level of distribution of different versions of the software platform and regularly publishes reports on the results of the work done.

In its research, AdDuplex uses data collected from approximately 5,000 applications that use the AdDuplex SDK v.2. Although the sample size is not specified in this case, the platform reports typically include data collected from approximately 60,000 computers. Of course, this is a small sample; but it also allows you to track the ups and downs of different versions of Windows. 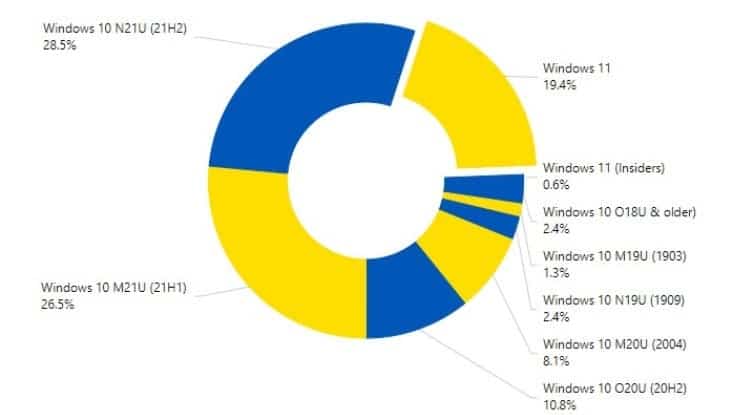 Obviously, a significant increase in the share of Windows 10 21H2 was facilitated by the end of the support period for Windows 10 20H2; which will end in May. In anticipation of this, Microsoft has rolled out the update to more compatible devices so that their users can continue to receive regular updates even after support for Windows 10 20H2 ends. As for the reasons for the slow spread of Windows 11, first of all, we should highlight the minimum system requirements for installing the OS, which not all PCs meet. In addition, upgrading to Windows 11 is optional, which also does not help accelerate the spread of the OS.

In separate news, it seems that Microsoft has listened to the public; and simplified the process of choosing a default browser. The innovation is implemented in the update KB5011563, which began to roll out earlier this week. After installing it, you can literally change the default browser with just a few clicks of the mouse; similar to how it happens in Windows 10.