Previously, the South Korean Samsung has been doing its best to make its Exynos SoCs comparable to the Apple and Qualcomm chips. But we have to admit that this plan failed. Two years ago, Samsung decided to give up its Mongoose cores in favor of ARM cores. The company’s latest flagship chip, the Exynos 2200, also features a GPU partnered with AMD. As you see, the company has revised its approach to chip manufacturing. Moreover, a new report suggests that it is considering changing the status quo to boost the performance of its home-made processors.

In fact, Exynos’ position in the AP (application processor) market is weakening. According to market research firm Strategy Analytics, Samsung Electronics’ share of the AP market last year was only 6.6%. This is significantly lower than Qualcomm (37.7%), MediaTek (26.3%), and Apple (26%). 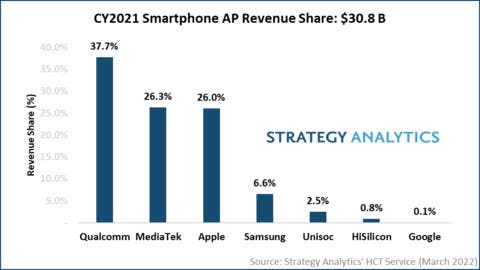 Inews24 reported that Samsung is planning to develop chipsets exclusively for its smartphones. Samsung’s System LSI division is responsible for making chips and is not very closely related to Samsung’s mobile division (called MX or Mobile eXperience).

The two units are more of a buyer-seller relationship. This simply means that the MX division is just one customer of LSI. In addition, Samsung’s chip manufacturing division does not just manufacture chips for Samsung-branded mobile phones, but also for other customers such as VIVO.

Samsung president and head of MX business TM Roh said that Samsung will now make processors exclusively for Galaxy phones. The plan was allegedly revealed during an all-hands meeting when an employee asked how the company would resolve the Game Optimization Service (GOS) dispute.

By the way, GOS is an app pre-installed on Samsung phones that prevents the device from overheating. It could provide such an effect by limiting the phone’s performance. Of course, Samsung has been criticized for not allowing users to disable the service. However, later, the company pushed an update to resolve this issue.

Bugs Will Be Fixed

The highest-end Galaxy S22 Ultra had issues with GPS. Interestingly, this only affected the Exynos model, not the Qualcomm Snapdragon 8 model.

So in this regard, Samsung’s actions seem quite logical. We mean Samsung may now be taking the same approach as Apple when it comes to making chips. For Samsung, especially in the current chip shortage situation, making chips for its Galaxy phones should be more important rather than considering selling them to other manufacturers.

We also shouldn’t rule out the possibility that Samsung will partner with Qualcomm or MediaTek to make new chips.

Previous Redmi Note 12 Could Become The Most Powerful Mid-Ranger