The Android Authority portal has conducted a survey of more than 1,400 visitors, which clearly showed that despite the many official streaming services, and perhaps due to their diversity, the vast majority of respondents were involved in digital piracy in 2022.

Piracy has existed literally since the advent of the Internet and, it seems, does not think of disappearing anywhere – it is quite easy for violators of laws to find unlicensed copies of software, games, videos, music, texts, images and other content on the Web.

It turned out that out of 1,400 polled by the portal, 83.69% of users confirmed that they pirated content in one way or another in 2022. It is noteworthy that many people cite not the lack of funds as the reason, but the inability of the services to agree among themselves to create a service that allows accessing the content of different services.

Users are willing to pay, but not for all the numerous sites at once. “Imagine the top 10 songs scattered across Spotify, Deezer, Apple Music, YouTube Music and Tidal. Each contains two songs, and in order to listen to all ten, you will have to pay five subscriptions. This is how content streaming works today, ”one of the participants wrote in the comments to the survey. In addition, many simply cannot afford to pay for a dozen subscriptions at the same time, using content from each of them only occasionally.

Survey: More than 80% of respondents used pirated content in 2022

Many complain about the quality of legal services – it is often inferior to the level of pirated ones; both in terms of the quality of streaming content and the convenience of the interface. Using only legal content in 2022 was reported by 8.7% of respondents, while 7.6% evasively stated that they “don’t know”. 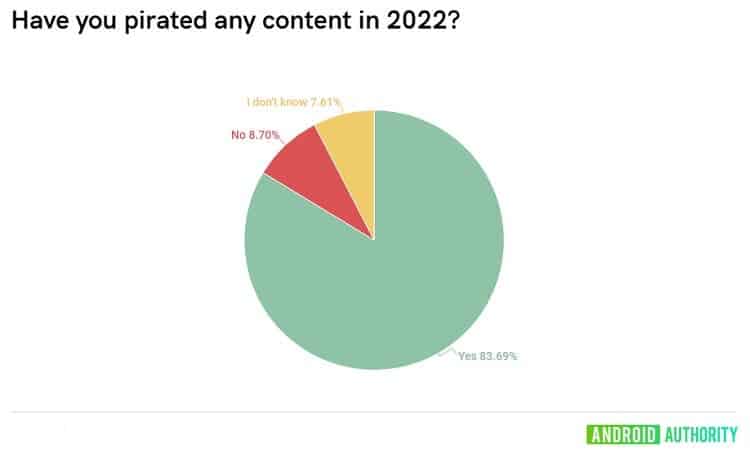 “The Gabe Newell thing is where I’m at. While there will always be pirates (people pirate legally free content), there are millions willing to pay. It’s the fact that piracy often offers not just the same for free; but an actively superior experience compared to paid. The legitimate customer willing to pay for 5 services still has to juggle numerous interfaces; tracking what shows have new episodes and where, on which app new content is available; which app has whatever title available they think of wanting to watch, inconsistency in basic app features; if they live in a country the content has been released, etc” another user commented.

Next Samsung's Galaxy could get Android 13 much sooner than expected

Netflix Spends Billions On Content But Unable To Attract Many Subscribers