From time to time, the media raises the question of whether radiation from a mobile device is dangerous to human health. True, as far as it is really detrimental to health, there are no serious and long-term observations. However, it’s no secret that smartphones emit radiation, but with varying degrees of intensity. And every time it turns out that in this aspect with a number of smartphones, things are not perfect.

A new data presentation has ranked different smartphones according to their radiation levels. The analysis by banklesstimes indicates that Google Pixel and Sony Xperia are among the highest emitters. However, as per the listing, the two aren’t the worst emitters.

The BanklessTimes published a report where they indicated those models that emit radiation more than others. The rating includes products from Google, Sony, Motorola, ZTE, OnePlus and Oppo. The leader was Motorola Edge – 1.79 W / kg, and in second and third places were ZTE Axon 11 5G (1.59 W / kg) and OnePlus 6T (1.55 W / kg). Slightly lower are Sony Xperia XA2 Plus, Google Pixel 3XL and Google Pixel 4a. The entire top 10 devices with the highest radiation can be seen in the table. It is noteworthy that the rating mainly includes old models and among them three devices from Google. 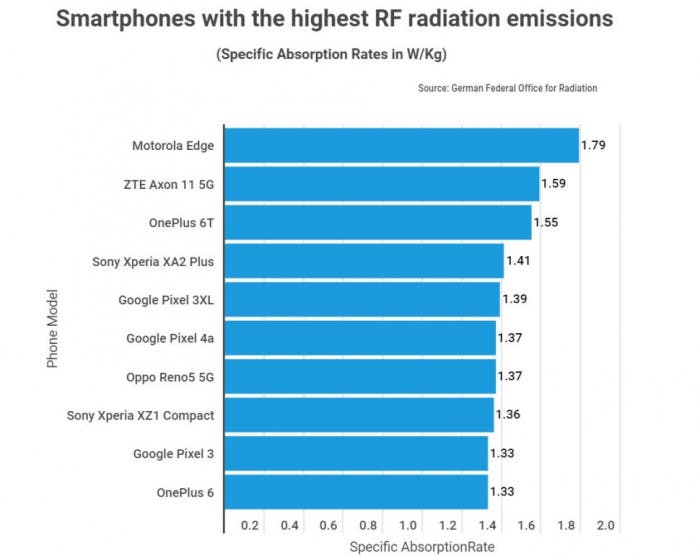 Recall that the radiation of smartphones is characterized by the degree of impact on the body. This is measured in SAR – Specific absorption rate (SAR) is a measure of the rate at which energy is absorbed per unit mass by a human body when exposed to a radio frequency (RF). For the maximum SAR value in different countries of the world, smartphones with radiation from 1.6 W / kg to 2.0 W / kg are accepted. For example, the US Federal Communications Commission (FCC) has set a maximum SAR level of 1.6 W/kg. With an eye to this parameter, of the top 10, only the Motorola Edge exceeded the radiation limit.

It’s important to note that all cell phones emit some level of radiation. But the volume of emissions varies with many factors. These include the type of device and model, its age, and the strength of its transmitting antenna. Another factor is the distance from the nearest cell tower.

Our phones emit RF waves within the electromagnetic spectrum. Whereas 2G to 4G emit RFs in the 0.7–2.7 GHz range, 5G phones can do so up to 80 GHz. Owing to their low frequency, these are low energy frequencies hence nonionizing. Their low energy isn’t sufficient to alter DNA, thereby heightening cancer risks.

Previous The 10 Best Fitness Trackers You Can Buy In 2022