Today, VIVO released a few new mobile products, and they all were in the spotlight. Among them, we should mention the first VIVO folding screen smartphone dubbed the VIVO X Fold, the new large-screen smartphone known as the VIVO X Note, and the company’s first tablet, namely the VIVO Pad.

In this article, we’d focus on the VIVO Pad, which is a flagship tablet and ready to compete with the top-end models on the market. 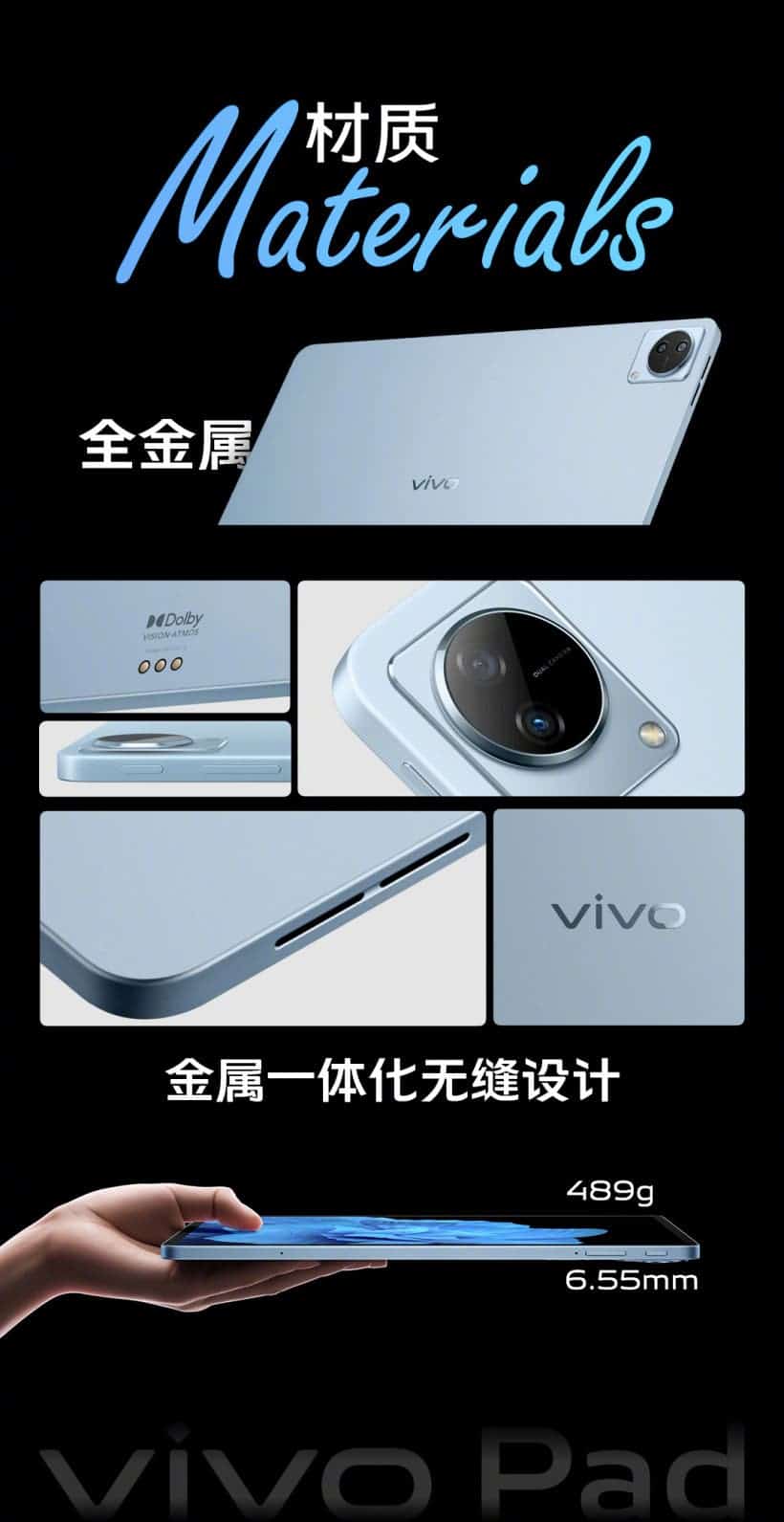 The fuselage is made of a whole piece of aviation aluminum alloy material through 11 processes such as extrusion molding, CNC, grinding, polishing, sandblasting, anodizing, highlighting, and laser engraving. In effect, the company got a light and thin tablet. The thinnest part of the metal back cover is only 0.53mm. At the same time, the thickness of the whole machine is only 6.55mm and the weight is only 489g.

There are also quad-channel ultra-linear speakers inside the fuselage. They have a large amplitude of 0.7mm, which provides users with a wider audio range and greater sound energy performance.

Under the hood, our protagonist sports the Qualcomm Snapdragon 870 chip and 8GB of memory. Also, the tablet supports memory fusion 2.0 technology. So when necessary, the system will borrow 4GB of memory from the storage and use it as RAM. By the way, there are two storage variants of 128GB and 256GB. 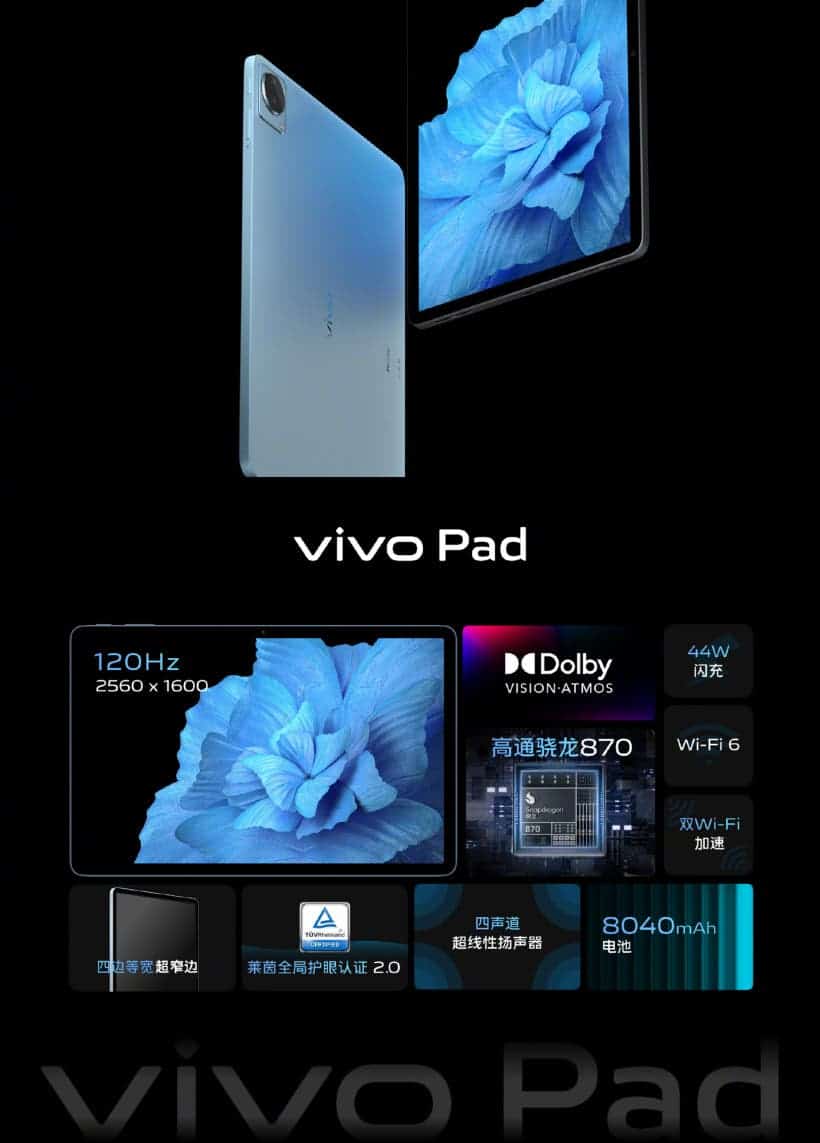 Another highlight of the tablet is the built-in 8040mAh large battery. On a single charge, it can last for 15 hours when doing basic office tasks, 11 hours when watching videos, etc. What’s more important, the VIVO Pad supports 44W fast charging.

The system uses the system architecture, design concept, and core functions of OriginOS. So it is capable of providing users with the same stable experience as mobile phones. 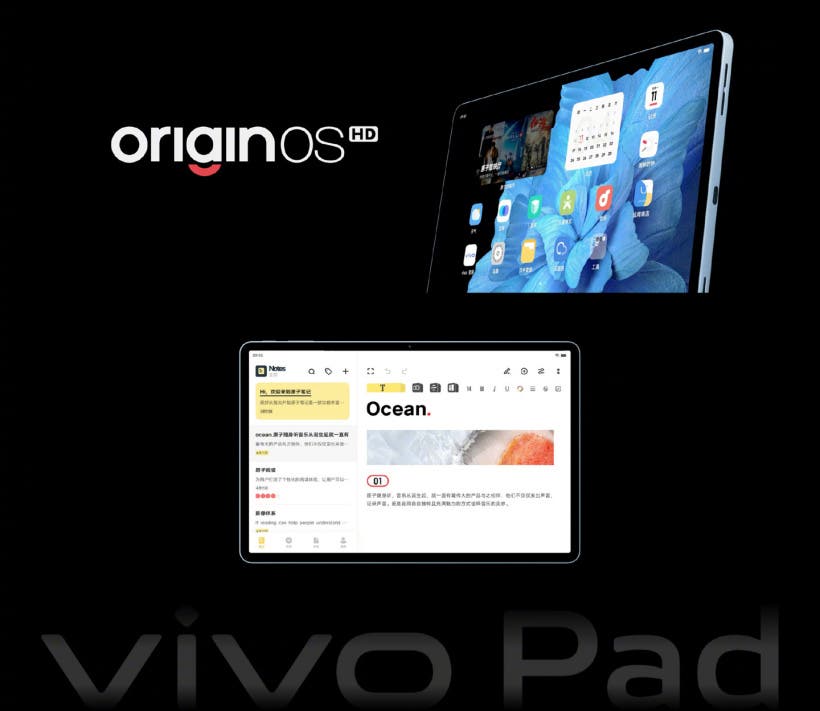 At the same time, it supports NFC one-touch mutual transfer, multi-window applications feature, full-screen multi-tasking, and other functions. As for the former feature, for NFC one-touch transfer, users only need to touch the upper right corner of the tablet with the phone. Once done, users can start transferring the phone files to the tablet.

The VIVO Pad has three lenses, each of which is carefully designed for shooting through tablets. It’s worth noting that there is an ultra-wide-angle lens, which can capture the entire PPT screen during a meeting. The front camera comes with a ToF distance sensor, which is customized and uses an AI gesture recognition algorithm. In effect, it can timely remind and correct the viewing distance and posture, and help children in online classes to develop good habits.

The VIVO Pad also comes with a smart touch keyboard and a VIVO stylus. The keyboard also has a large touchpad, reaching 5736mm2. It is comparable to a notebook keyboard. The keys are designed with 64 keys, a 1.3mm long keystroke, and a 1.8mm long keystroke. The keyboard itself is also a stand, with a built-in hinge that can be hovered at will, and supports 0-155° stepless adjustment.

The VIVO stylus adopts an aluminum alloy pen body, supports magnetic absorption, and the flexible pen tip realizes real damping. Due to the dry battery power, using 2 hours a day, it will last for a year.

In terms of interface, the VIVO Pad uses a high-speed USB 3.1 port, which can output high-definition pictures up to 4K@60Hz. When reading external hard drives, the transfer speed is as fast as 5.0Gbps. When you go out, you can also turn into a power bank to reverse charge your phone.